Based on Shakespeare’s tragedy Othello, written around 1603. Of humble origins, Iago – a highly talented final-year student at the Venice Architecture Faculty – is surrounded by rich nobles, among whom stands out Othello, the son of an internationally renowned architect and friend of the university rector. Clearly very well-connected, Othello cheats Iago out of the merits of his studies and takes his place as head of the Biennale preparation project. Othello also steals the object of his desire, Desdemona, the rector’s daughter, with whom Iago has been hopelessly in love for some time. Convinced that life is a series of injustices, Iago starts a ruthless fight, weaving a web of lies and deceit, in order to take back what is rightfully his as well as win Desdemona’s love.

For the second year in a row, European Film Promotion (EFP) successfully offers Film Sales Support (FSS) to European sales agents for the marketing of European Films at the Hong Kong FILMART. One...

There are five European titles coming out tomorrow, of which three are Italian and cover a range of target audiences. Iago, the second feature by Volfango De Biasi, being released by Medusa on...

From its very title, Iago, the new film by Volfango De Biasi, turns the point of view of the Shakespearian tragedy on its head. Beginning with the main character – no longer Othello (French model... 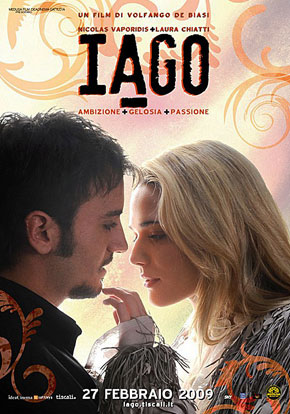