THE LADIES GET THEIR SAY

A bittersweet comedy about the world of women. Two eras, two ways of being a woman. The Sixties: a cards game just to be together. Every Thursday afternoon, four friends chat about loves and betrayals, theorising about motherhood, life and marriage problems. They argue, they laugh, they talk with complicity and a little cynicism. Thirty years later: the daughters are back together at the funeral of one of their mothers. They are the same girls who, during the card games, were playing in the next room. Like their mothers, they spoke about their dreams and fears, the passage of time, their working life, the desire for motherhood. Decades have passed but female identity seems unchanged, despite a career and empowerment, today as before, being a woman means energy, joy, efforts and pain.
Based on Cristina Comencini’s eponymous play.

more about: The Ladies Get Their Say

Local cinema experiences 8% drop in first half of 2009

Italian cinema is losing audiences while US films are at full sail according to results for the first half of 2009 in the movie theatres monitored by Cinetel, compared to the same period in 2008....

After selling out theatres nationwide, Cristina Comencini’s play Due partite (“Two Games”) has been made into a film by Enzo Monteleone and will be released on March 6 by 01 Distribution on 200... 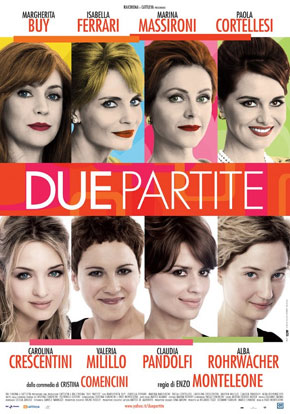