12/08/2013 - Sam Garbarski is in Locarno presenting Vijay and I, a comedy starring German Moritz Bleibtreu and American Patricia Arquette 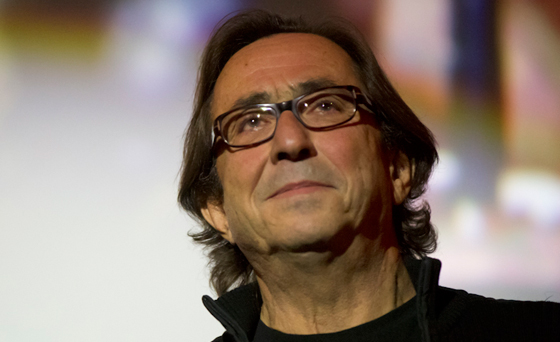 Belgian Sam Garbarski is seeing his film Vijay and I [+see also:
trailer
interview: Sam Garbarski
film profile] attract interest from international distributors after a film screening on the Piazza Grande during the Locarno Film Festival. In this comedy, the author of Irina Palm [+see also:
film review
trailer
interview: Sam Garbarski
interview: Sébastien Delloye
film profile] transforms Moritz Bleibtreu into an actor unsatisfied with his work and family lives. After a misunderstanding, everyone thinks he has passed away on the day of his 40th birthday. He decides to take advantage of the situation, attending his own funeral in disguise and deciding to create a new life for himself. The film was shot in New York and stars Patricia Arquette and Danny Pudi.

Cineuropa: There is something bitter to this story’s sense of humour. It sets up scenes other directors would have shied away from, just like in Irina Palm. Was your intention to carry the spectator onto little known grounds?
Sam Garbarski: Writer Amos Oz says that a good reader does not look for an author’s path in a story, but his own. I agree with this. This means that what I want is for the spectator to make his or her own journey through the film. I don’t like manipulating that point of view with a screenplay or with my work as a director.

The story plays with the idea of being able to reinvent oneself without having to die. How was that idea born?
I do not believe in reincarnation, which is why I thought of something that was close to that, and could be achieved by someone through a set of circumstances enabling that person to completely reinvent their lives. That is the main theme from the film. The main character tries to create the life he always wanted.

In a certain sense, this is what happened to you too. You worked in advertising and transitioned to cinema when you were 50. How did this change come about?Without planning. I was happy in advertising. One day, in a meeting, I complained about the artistic direction from one of our campaigns. A colleague of mine dared me to do it myself. I successfully filmed an ad and told myself I had had beginner’s luck. I continued making ads and I was told they looked like 20-second films, so I started getting into cinema. Now I cannot do without it.

The film is a coproduction between Germany, Luxemburg and Belgium, but was shot in New York.The film needed to happen in a multicultural city and also be a place where actors seeking success would come. The story could have been set in London but for production reasons, it made sense for it to be set in New York. And which director would ever refuse the opportunity of shooting in New York?

Would European cinema benefit from having more stars like Daniel Brühl and Monica Bellucci appear in European productions that weren’t in their own country?
Absolutely. I always say that Moritz Bleibtreu is the German Javier Bardem. I think that this is already happening in certain ways. With all the financial problems we are facing, co-productions between European countries are the most common solution meaning that casts and technical teams are more international.

Jonas Poher Rasmussen • Director of Flee
“I didn’t intend to do a refugee story; I wanted to do a story about my friend”

Icíar Bollaín • Director of Maixabel
"In the Basque Country, they still have a complex task ahead of them – that of learning to live together"

Peggy Johnson  • Executive Director, The Loft Cinema
“We have open doors to any films and no limitations”

Sinje Köhler  • Director of Viva Forever
“Real friendships have a solid base that won't alter with age, something that stays forever”