11/05/2018 - CANNES 2018: We talk to Icelandic director Benedikt Erlingsson about Woman at War, presented in the Cannes Critics’ Week 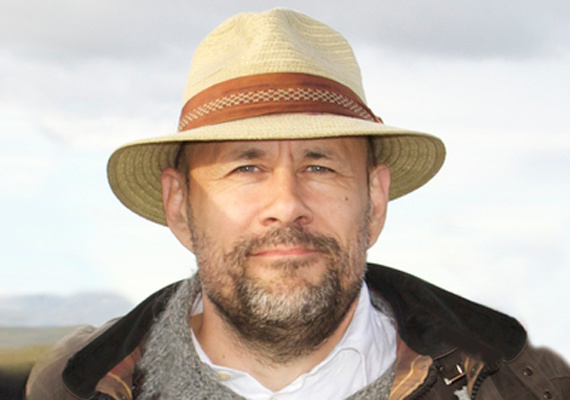 Cineuropa: Was it always supposed to be a woman in the lead?
Benedikt Erlingsson: The story demanded it – it wasn’t about being politically correct. Women are very active in the fight for protecting the Highlands, and all environmental battles in general. Like Berta Cáceres Flores, the Honduran environmental activist murdered in 2016, or Sigríður Tómasdóttir, who in the 19th century managed to protect a waterfall that is now the main tourist attraction in Iceland. I was raised on Pippi Longstocking – she was as influential in my life as she is in my daughter’s. But to be honest, I am not very interested in gender.

All of the events in the film are bound together by music – like the strange orchestra that keeps following Halla around.
They are the Greek choir! You have it in theatre all the time in some form or other – verfremdung, or distanciation, like in Bertolt Brecht’s plays, for example. I think it’s a pity it’s not used more in film. Although Fellini would always treat musicians as a part of the presented reality, and then there was this comedy called There’s Something About Mary, which had troubadours. This local band and the Ukrainian choir are like the voices in her head, trying to convince her to abandon this crazy mission and save the child she is planning to adopt. They are constantly fighting each other.

It was helpful for understanding her inner conflict better because in Iceland, you don’t really say what you think. You speak through your actions. My father used to say that a Nordic man doesn’t cry: if he feels sorrow, he either explodes out of grief and dies, or a snowflake comes out of his eye. But then again, he cried all the time [laughs].

When it’s time to look for the culprit, the authorities in the film react by bringing in the first foreigner that they run into. But it’s a local person that decides to make a statement.
We have this expression that could be translated as “coming from a foreign rock”. It’s so easy for the people in our country to blame the “others” if something happens. In America, too – the man-who-should-not-be-named does it all the time. In this movie, the government immediately implies that some foreign organisation must be behind it all: a terrorist organisation with ties to criminality. In the fight against whale hunting, for example, it’s always the foreigners who protest against it. So then, young people and activists are being criminalised in the media. It’s the logic of the fascists – the oldest method in the book.

Is it true that you got the idea for the film while participating in a directing workshop?
It was a very beautiful experience: we were talking about our creative process, and then in came these very serious people from the World Bank Group. They wanted us to talk about climate change, but you know how it is – artists don’t like to be told what to do. We promised to educate ourselves, and when I came home, that’s what I did, finally realising the gravity of this matter. I used to be an activist when I was younger, too, so there were many impulses that just came together. I ended up thinking: how can you make a feel-good film about climate change?

Halla’s desperation is palpable – armed with a bow and arrow and little else, it feels like she is David taking on Goliath.
The thing about activists is that they are always fighting the high-tech with low-tech. They don’t have the means, so they have to use their wits instead. It’s always about the underdog finding the simplest solutions. Take Gandhi – he understood that sometimes you need action, but it doesn’t have to be violent. He was going for broke: he was trying to sabotage the structure of the British economy. Or take Star Wars, where they were fighting these Death Stars with some old, crappy technology. Halla has a guy on the inside, which makes it easier. In Iceland, we are never far away from the ones in power – there are so few of us that we are always one handshake away from a Member of Parliament.

You show that climate change is still proving extremely controversial. Why do so many people perceive Halla as a terrorist?
We have to remember that real events often have nothing to do with their coverage in the media. There is a whole machine spreading doubt and trying to stop us from caring. For me, it’s pure evil. My friend, who is a scientist, says that in terms of climate change, people often prefer to be in denial. It’s hard for them to change their lifestyle for some “next generation”. If I were a politician, I would try to convince them, but then I would have to say: vote for me and you will get less of everything. I will give you fewer cars, fewer planes, less food. But what you will get will last longer, and your life will be happier.

Patricia Mazuy • Director of Saturn Bowling
"I had to embrace the subject, and to show courage"