“A dream of the world can be more interesting”

19/05/2018 - CANNES 2018: Terry Gilliam chatted to us to discuss the controversy surrounding his long-awaited The Man Who Killed Don Quixote, which served as Cannes’ closing film this year 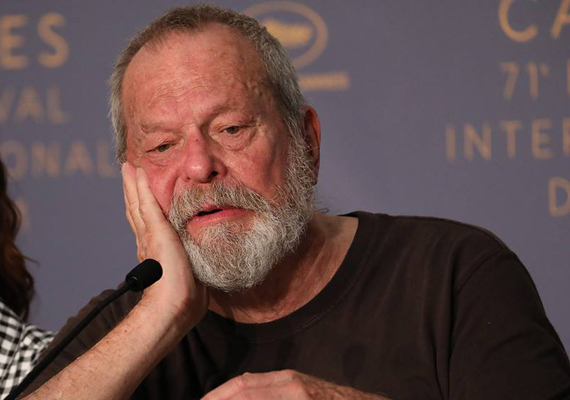 Twenty-five years in the making, The Man Who Killed Don Quixote [+see also:
film review
trailer
interview: Terry Gilliam
film profile] is finally being unveiled to the world as the closing film of the Cannes Film Festival. It arrived in Cannes under a cloud, as producer Paulo Branco took out a writ to try to stop the film from being shown. The press screening for the movie at Cannes was prefaced with an on-screen disclaimer noting that the screening “shall in no way prejudice” this case. Director Terry Gilliam discussed the issue that continues to ensure that The Man Who Killed Don Quixote will be remembered for its troubled production history.

Cineuropa: What went wrong with Paulo?
Terry Gilliam: Nothing went wrong with Paulo. We needed X amount of money to make the film, and he failed to raise even half the amount. How about that? Even worse, in my contract, he had to show me a budget, he had to show me all the financial dealings, and he refused to show me anything. In the end, he said I had to sign a new statement – either I signed it or he would close the film down – and it said he would make all the decisions and I would have to follow every decision he made. He gave me 24 hours to sign, and I didn’t, so he pulled the plug. Boom. Very simple.

Why has the novel stayed with you all this time?
It is an impossible novel – it goes on forever. The novel is extraordinary, and it is unfilmable. What is great about it is the characters: you have Quixote and Sancho, and I think everybody on the planet is both a Sancho and a Quixote – and it’s all about which one wins.

The novel is about chivalry, dreams and reality; how does that fit with your outlook?
Some people have a romantic idea of what life should be. I’m one of the romantics. I don’t want to be restricted by the way the world really is. A dream of the world can be more interesting.

How did the 25-year production process affect the film?
This movie made itself, and all of the problems led to the film that we’ve ended up with today. It’s very different from what began 25 years ago, and it’s much better than my original plan, so thank God I failed and the film succeeded.

Elie Wajeman • Director of A Night Doctor
"I wanted to treat him like some sort of private detective, winding his way through the dangerous, big city"

Arman T Riahi • Director of Fox in a Hole
“My film is an homage to how impactful teachers can be, but also how human and how broken they are”

Yves Blösche • Distributor, Filmcoopi Zürich
“We need to face new ways of communication from a local and worldwide perspective”