“The most important thing for me was the spiritual component”

12/09/2018 - VENICE 2018: We talked to Kazakh director Emir Baigazin, who presented his third feature, The River, in the Orizzonti competition programme and won Best Director to boot 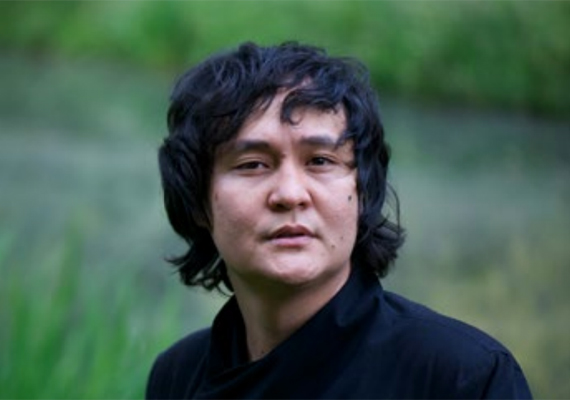 Kazakh writer-director Emir Baigazin first impressed in 2013 with his debut feature, Harmony Lessons [+see also:
film review
trailer
film profile], which premiered at the Berlinale. After the second part of the trilogy, The Wounded Angel [+see also:
trailer
film profile], in 2016, he has come back this year with the final instalment, the metaphysical, ironic and visually stunning The River [+see also:
film review
trailer
interview: Emir Baigazin
film profile]. The film was presented in the Orizzonti competition at the 75th Venice Film Festival and earned Baigazin the Best Director Award.

Cineuropa: What inspired you to make this film?
Emir Baigazin: The creative process in general resembles mercury – one drop attracts another drop. The idea for this film first came to me when I was travelling by plane, and I saw a beautiful sunset. I remembered how I used to go to the river in my adolescence. I remembered this wonderful sensation that I had on the river at sunset, the sensation of incredible happiness, bliss, and I decided to make a film about that. It was important to me to make a movie based on this sentiment, a film without any drama or clashes – a film that would be transcendental. Two weeks later, I stumbled upon a Bible quotation, Solomon’s words, which say: “Thoughts in the heart of a man are like deep waters.” And that was another source of inspiration for the film. That’s when I remembered about shooting the movie on the river. I thought I could maybe develop it in a slightly different key, and that’s when I decided how to end the trilogy.

Of course, there were other sources of inspiration: in my case, I never see films, but I do listen to music, and here it was Beethoven’s “Prelude in D Major” and the paintings of Franz Marc. When I was already editing the film, I was looking at the way we shot the river, and I was very satisfied. It was just as I wanted, maybe even better. And for some strange reason, I became very attracted to stained-glass windows in churches. It’s this very rigorous form of stained-glass windows that influenced this very rigorous editing in the film.

Why don’t you watch films?
I think I’ve already seen so many films that in one way or another they have already influenced me. Having said this, I don’t mind when viewers find references or parallels, if they’re good examples of world cinema, although I don’t have any role models in cinema whom I’d like to follow. I think, in this film, what was most important for me was the spiritual component.

How does The River relate to your previous films in the trilogy?
I didn’t like the fact that in my two previous films, people spoke of the cruelty of the characters without realising the dialectical nature of them. So I wanted to make another movie, where I would preserve the tension of the previous works, but without showing the actual murder and highlighting the dialectical nature of the characters. Harmony Lessons had a dark tension to it, and I didn’t especially like it, because it is more difficult to make light films. The idea of shooting this third movie was to liberate the protagonists from this very heavy feeling of guilt and sin. While I was shooting the final scene, with the dance on the river, I wanted to feel myself growing light-hearted again and experience that sense of relief.

In The River, it seems you see modernisation and globalisation as destructive forces.
Actually, what I show here is just a family and a guest who visits that family. So I wanted to leave the viewer with more freedom for his or her own interpretations. The guest can be interpreted as anything – as God, as the Devil or as civilisation – because we realise he doesn’t only destroy the family; he also tests them. So I’m curious to hear different interpretations of this.

So would you say your movie operates more on a symbolic or archetypal level than a political one?
I know this film can generate both types of interpretations; my task as an artist is to create a space that can generate them. I think herein lies the greatness and the richness of art. You don’t create one idea, but rather a prototype of the world, in which different ideas can come together and clash.

Tomasz Wolski • Director of 1970
“You can't always focus on what's difficult. Sometimes you need to tell a joke”

Igor Stankovic • Distributor, MCF Megacom
“Maybe cinemas will not be the same, but once all this is over, people will be hungry for new films”

Alessandro Raja • CEO and co-founder, Festival Scope
“I think that the majority of festivals will develop their own online strategy and be somehow hybrid”