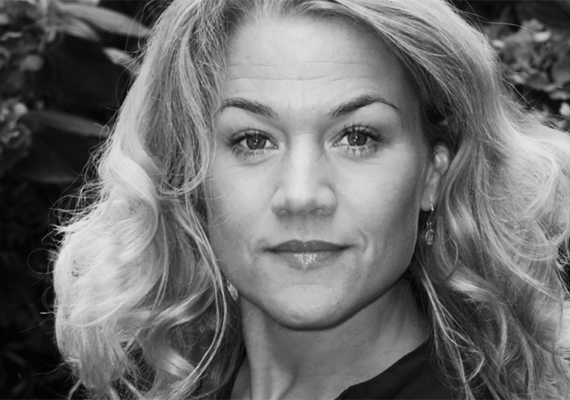 The phoenix, the mythological bird that rises from the ashes, is in Camilla Strøm Henriksen’s story represented by Astrid, a gifted, attractive painter, troubled by mood swings and prone to alcohol abuse. Her children, Jill and Bo, never lose hope in her ability to get on her feet, to move on and to be Mother again. But things are hard. Their father, himself a gifted musician, is absent and ducks out of any responsibility. And so the spiral moves, steadily downwards... Phoenix [+see also:
film review
trailer
interview: Camilla Strøm Henriksen
film profile], screened in the Discovery section of the Toronto International Film Festival, is a story about when children never get to be children, told poetically, rather than in the social-realist tradition, which is so common in Scandinavian cinema. The director, a seasoned actress on Norwegian screens – she won an Amanda for her performance in A Handful of Time (1989) – premiered her feature debut nationally at Haugesund in August and has now done so internationally at Toronto.

Cineuropa: You have been acting for many years, on stage, television and film, forging an impressive career and winning some good awards as well. But you quit. What brought on this decision?
Camilla Strøm Henriksen: I felt an indefinable frustration with the acting world and wasn’t quite sure if it was because of the parts or the directors I got, or didn’t get, or what it was. I then decided to direct my own short [2004’s Lace], which was self-funded and on which I teamed up with people who would work for free. I immediately felt like doing more and was accepted at the London Film School. I left one calling for another one – I am now a director who has left the acting profession entirely. I still love working with actors, but I also love to write and to shoot, and even edit, but especially to write and shoot. It gives me quite a rush.

Was it in London where you met David Yates, of Harry Potter fame, who is credited as executive producer on Phoenix?
It was. This was before Harry Potter, but he had done State of Play for TV and was a strong force already, even back then. We kept in touch, and I sent him my script for Phoenix, which had been turned down by several Norwegian producers, but I wanted to know if he saw any potential in it. It took a while for him to get back, but when he did, he told me he thought it was great and original, and he asked me when I was going to shoot it. Unfortunately, no one in Norway had shown any interest, I said, and then he said he would help me. Which he did. He’s been the artistic guide and mentor on this journey – which, in all, took 12 years. Without him, there would be no Phoenix.

What were the problems, according to the Norwegian producers?
They thought it was interesting and well written, but they didn’t see which age group it targeted or which genre it belonged to. They didn’t know how to sell it. It’s something of a hybrid, between a fable and a family drama, with a fair share of melodrama, which is not a Norwegian tradition. We do things “drier”, in a more sober way. But David helped me to make the script sharper and stronger, and eventually, Gudny Hummelvoll got on board as my producer. Gudny and I then collaborated on the Norwegian side of things.

Two well-known, well-travelled actors, Maria Bonnevie and Sverrir Gudnasson, play the parents. The children are less experienced, but very good. Was it hard to find them?
They hadn’t done any acting at all. We tested out a number of children, but when I met Ylva, I intuitively noticed the way she looked at me; there was something there that resonated. And the first scene we did really convinced me. She’s simply a very soulful person. Interestingly, both Ylva and Casper, who play these unfortunate children, are from very stable homes. It was a lucky choice; they give us a strong feeling of hope at the end.

“Children are man at his strongest - they abide,” as Lillian Gish says in The Night of the Hunter, another story about two little ones who are all on their own. Jill and Bo certainly abide.
I love The Night of the Hunter. I thought a lot about it when I was writing this film. Another movie that crossed my mind was Pan’s Labyrinth [+see also:
film review
trailer
film profile]. Phoenix is strongly inspired by both of them.