“I do not want to make documentaries without people”

31/10/2018 - Slovakian documentarian Marek Kuboš speaks to Cineuropa about his retirement from documentary filmmaking, which he captured in his farewell doc The Last Self-Portrait 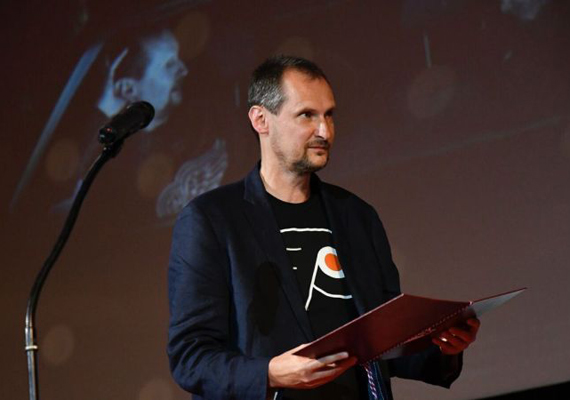 Slovakian documentarian-producer Marek Kuboš belongs to the so-called “Generation 90”, a generation of talented Slovakian documentary makers. His works have a wide-ranging social scope, even though he tends to focus on individuals. He himself is the main subject of his latest feature, The Last Self-Portrait [+see also:
trailer
interview: Marek Kuboš
film profile], which screened at the Ji.hlava International Documentary Film Festival and which he claims will be his last doc before returning to fiction.

Cineuropa: You have not shot an auteur documentary for 14 years; how come?
Marek Kuboš: I started shooting The Last Self-Portrait after a 14-year hiatus. I worked on a couple of projects – something did not pan out, and then something else crashed and burned. Coincidentally, that same pattern began to repeat itself on every project. I approached possible subjects with a voice recorder, and they said yes; afterwards, when I returned with the camera, they said no. Back in the 1990s, people would be really keen to speak on a voice recorder or on camera. Today, hardly anybody wants to talk on camera, about their job, for instance. Only extroverts are willing to step in front of the camera, but these people do not interest me; I prefer shy, sensitive people, not those exhibitionists that are streaming out of reality shows nowadays.

What was the impetus behind The Last Self-Portrait?
First of all, it is an answer to the question of why I did not shoot any auteur documentary film for 14 years. Along the way, a couple of smaller questions cropped up, which I have asked myself and my fellow documentarians. I am just asking questions, and it doesn’t matter if I find answers or not; I ask and see how people react. That is my role. As Krzysztof Kieślowski, my favourite director, once said: “My role is not to know.”

So the crisis in documentary filmmaking in your case does not lie in the form itself, but in the unwillingness of subjects to step in front of the camera?
That’s right. As I’ve been touring with The Last Self-Portrait, people have asked why I didn’t finish the film I talked about in my latest documentary, why I didn’t complete it without the subjects [the victims of a scam]. But that type of documentary filmmaking does not attract me; I do not want to make documentaries without people. I want to dig deeper into topics, and that cannot be done without people. Lately, a lot of movies that are labelled as documentaries are basically fiction films, as the filmmakers are directing the protagonists to do something they would not usually do, and this, in my opinion, is a lie and something I do not want to do.

When I toured the festival circuit with my previous documentaries back in the 1990s and travelled all over the world, a lot of people in different cities would come up to me and ask how I managed to shoot the movie. I said I came along with the camera and shot the people. The response to that was identical on every continent: “This is not possible here.” I did not understand that at the time. The original title of The Last Self-Portrait was This Is Not Possible Here. While I was shooting it, I looked deep inside myself and told myself that one of the keys to the film would be that if people were trying to avoid my camera, I would open up. I turned the tables. If everybody did the same, that would create the ideal situation for making documentaries. I only did it once because I wanted to bid farewell to documentary filmmaking with dignity. The script was written with me saying, “I am done making documentaries,” but eventually, it changed to “I am leaving documentary filmmaking with the chance I will return to it.”

The majority of active Slovakian documentary filmmakers are featured on camera answering your questions. How did you manage that?
We all know each other, the Generation 90, and I am a big fan of theirs. It was very open and honest what they were saying – sometimes I even cried when they were explaining how they perceive me or documentary film because they are very intelligent and intuitive people, and it was a joy to speak with them.

They said a lot of interesting things, many of which did not make it into the final cut. Even when I left documentary filmmaking, I asked for a grant to be able to compile those answers into a separate film, just talking heads of these documentarians, in order to capture the current mindset of Slovakian documentary film.

So is Marek Kuboš done with filmmaking?
When I won the top prize for A Photographer’s Journey in Trenčianske Teplice in 1995, I said in my first-ever interview as a director that I wanted to make six fiction films. So I’m going to work on fiction film now.

Fred Baillif • Director of The Fam
“What I want to say is: Stop closing your eyes!”

Jacqueline Lentzou • Director of Moon, 66 Questions
"This is a film from the heart, with heart"