"In reality, these talent shows are even worse than we described them; it's a really tough world" 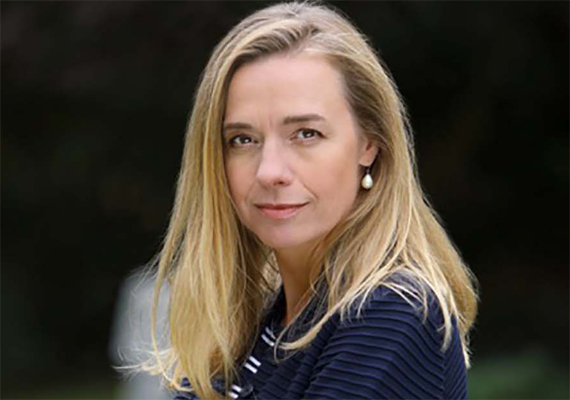 Czech writer-director Andrea Sedláčková is at the Film Festival Cottbus to present her new feature, Backstage [+see also:
trailer
interview: Andrea Sedláčková
film profile], for which she worked with both professional and non-professional actors and dancers. The movie enabled her to plunge into the topic of hip-hop music, a scene that had previously been unknown to her. Backstage is a co-production between the Czech Republic and Slovakia.

Cineuropa: Where did the idea for the film come from?
Andrea Sedlackova: The producers offered me this screenplay. First, it was a story centred on a handicapped boy falling in love with Mary, a girl who dances, and after several years of writing, the focus switched to the story of Mary and the dance group, and their appearance on the TV competition. I liked the script right away because it was something completely different from what I had done before. Dance films are very pictorial. Visual emotionality is the alpha and omega of this genre, and I had been filming psychological films up to that point, so I enjoyed using my new, original means of expression to describe a completely different world. This is the world of hip-hop, which is an art practised by young generations from all social strata at once, a sort of natural expression of the need for freedom and self-realisation.

How did you find your protagonists?
As always, during a long casting process. It was even more demanding here because the main heroes not only had to be excellent actors, but also be excellent dancers. It was hard to bring together professional actors with non-actors who were mainly intended for the roles of dancers. Dancers play in a very authentic way, but it's another kind of acting to that of professional actors.

Does the location that the protagonists use for their rehearsal really exist?
Yes, it is a real station in the High Tatras. We found it by chance; I wanted the heroes to come from a small industrial city at the foot of the mountains, and we finally found the location in the town of Svit, which is visually very striking and also, by chance, has a magnificent train station with a wonderful waiting room.

How did you create the character of Hugo?
I tried to make Hugo touching and authentic.

Two of the friends are from a Roma family. What is their status in Slovakian society?
I do not live in Slovakia; I'm a Czech, so I do not have a perfect overview of the situation. But it seems to me that their situation is rather complicated; many of them live in ghettos and do not have the opportunity to engage in a normal social life. But on the other hand, there are many Roma who live a normal life like everyone, which is the case for our two actors.

What is the relationship like between Slovakia and the Czech Republic?
Since we have been split into two countries, the situation has greatly improved, in every way. The Slovaks are happy to be independent, and the Czechs have finally understood that they have their own history and life. In the film industry, we have a great collaboration – there are many Slovak directors and cameramen working in Prague, and many Czech directors and cameramen working in Bratislava.

What kind of status do such "reality" and "talent" shows have in Slovakia?
When I read the first version of the script, it seemed to me that the author was exaggerating in the depiction of the shows; I thought it could not be as bad as it was described in writing there. Then I started to meet people working in this area – directors, choreographers and jurors – and I found that the reality was even worse and that it really is a tough world. Very often, as the film shows, the competitions are partially manipulated. It’s not always the most talented people who win, but rather those who have some kind of attractive quality for the viewer, whether through their life story or, for example, through their impassiveness that impresses the audience and allows them to identify with them. Often the audience prefers the weaker candidates, and the producers know it, so they are sometimes dragged along to the final, even though they may not deserve to be there. And then I also visited the filming of these competitions, had a look behind the scenes and took notes. Some of the jury dialogue is, for example, inspired by reality.

Daniela Elstner • Managing director, UniFrance
"The variety of our films is wider than almost anywhere else in the world"

Dr Huw Jones • Lecturer in Film, University of Southampton
"There’s a danger that documentaries will lose value in the eyes of audiences if they are only available on streaming platforms"