The Girl with the Dragon Tattoo

29/04/2009 - A suspenseful investigation into Sweden’s shady past in a dark thriller, the first cinematic instalment of a literary trilogy that sold over 10m copies

One is a stubborn investigative journalist in search of redemption and the other a brilliant yet unsociable computer hacker. Their names: Mikael Blomkvist and Lisbeth Salander. Familiar to millions of readers enthralled by the Millennium detective trilogy by Sweden’s Stieg Larsson (a journalist famous for his fight against the far-right, racism and sexism, who died in 2004 just before the publication of his best-seller), the two characters make it onto the big screen in an adaptation of the first volume: The Girl with the Dragon Tattoo.

Charged with the tricky task of not disappointing the book’s fans whilst winning over a wider audience, Danish director Niels Arden Oplev pulls off a compelling thriller. The Girl with the Dragon Tattoo [+see also:
trailer
interview: Niels Arden Oplev
interview: Søren Stærmose
film profile] keeps viewers on the edge of their seats throughout its 150-minute runtime, without renouncing the realism of an investigation that uncovers the truth about the dark side of Sweden’s past, a corruption of the soul that still affects some of the film’s protagonists.

Penned by Nikolaj Arcel and Rasmus Heisterberg, the film remains relatively faithful to the novel, whilst focusing more on the central duo and taking a few shortcuts. This makes the feature tighter, at the expense of subplots and secondary characters skilfully developed in the book.

Having just lost a libel case to a powerful businessman who set up a trap for him, seasoned journalist Blomkvist (solidly played by Michael Nyqvist), a pillar of the monthly investigative magazine Millennium, finds himself sidelined. Contacted by Henrick Vanger (Sven-Bertil Taube), patriarch of an industrial group, he reopens a case that dates back 40 years: the unexplained disappearance of Harriet, who was 15 at the time and vanished during a family gathering on the island at the centre of the story.

Travelling to the island, Blomkvist throws himself fully into this seemingly impossible investigation. It leads him to the heart of a Nazi past that has blighted subsequent generations and sees him join forces with the remarkable Salander (wonderfully portrayed by Noomi Rapace). Behind her gothic appearance, tattoos, piercings and fierce independence, this young woman hides an extraordinary mind and computer hacking talents: a peculiarity that also causes her serious problems with her guardian Nils Bjurman (Peter Andersson).

The Girl with the Dragon Tattoo is carried by its sustained pace, thanks to the editing which, in the first part, skilfully interweaves the lives of Blomkvist and Salander (who do not meet until the 75th minute of the film). The film also fully explores the twists and turns of the investigation based on photographic clues from 1966 that are re-examined using modern computer technology in the style of Blow-Up.

Visually playing on the shadowy atmosphere, the feature successfully maintains constant suspense, alternating the Swedish-style on-site investigation (made popular by Henning Mankell’s inspector Wallander) with brutal bursts of violence related to the theme of women’s sexual exploitation. This combination gives The Girl with the Dragon Tattoo the dark effect of social criticism in the guise of entertainment. Viewers should also look out for the sequels, since the next two instalments in the trilogy – originally intended for TV – will also make it onto the big screen, thanks to the enormous success this first work has enjoyed in Scandinavia.

more about: The Girl with the Dragon Tattoo

The Girl with the Dragon Tattoo

A suspenseful investigation into Sweden’s shady past in a dark thriller, the first cinematic instalment of a literary trilogy that sold over 10m copies

"A real drama with real characters"

Rasmus Heisterberg is on his own for the first time, but he has it In the Blood

No Oscar nomination, but US and Swedish critics’ prizes for Östlund 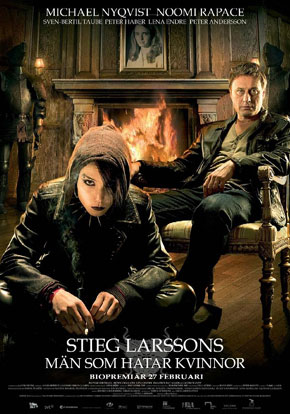