CANNES 2009 Out of Competition

Foreign martyrs die for France in The Army of Crime

Presented today out of competition in the Official Selection at the 62nd Cannes Film Festival, Robert Guédiguian’s The Army of Crime [+see also:
trailer
film profile] is an enlightening study of a little-known episode in the history of the Resistance movement in Paris during the Second World War.

The Marseilles-born, politically-engaged director’s new film lifts the veil on the formation, actions against the German occupier and arrest in 1943 of the Manouchian group, composed of numerous members of the FTP-MOI (Francs-tireurs and Partisans - Immigrant Workers).

Filmed in a classic directorial style, the story (co-written by the director, Gilles Taurand and Serge Le Péron) draws on solid historical facts, including the major role played by the French police in the roundup of Parisian Jews and numerous examples of shocking anti-Jewish and anti-terrorist propaganda in the French media at the time.

But the profound human focus, an integral part of Guédiguian’s style, underlines the strength of family ties, whether they be biological (parents, children and siblings), based on feelings (love, friendship) or a common denominator (exile, communist ideology, spirit of resistance).

Originating from Hungary, Poland, Romania, Spain and Italy, the lead characters (including Virginie Ledoyen, Grégoire Leprince-Ringuet and Robinson Stévenin) are guided by their group leader, Armenian-born poet Missak Manouchian (Simon Abkarian). Together, they organise attacks against German soldiers, whilst trying to evade the French police (played by Yann Tregouët and Jean-Pierre Darroussin), who are not afraid to use torture.

These attempted attacks lead to the execution of 23 members of the Manouchian group, following a trial that is exploited for the purposes of xenophobic and anti-semitic propaganda by French collaboration leaders serving the Nazis.

Offering an educational work at a time when immigration is currently a subject of controversy in Europe, Guédiguian also describes the sacrifice of private lives (loving one another during the war, hiding, telling lies) and ethical considerations (killing for a cause, obeying orders) through rather archetypal characters who are nonetheless engaging due to the bravery of their clandestine and uneven struggle against a then-dominant enemy.

Produced by Agat Films & Cie, The Army of Crime was co-produced by France 3 Cinéma and received an advance on receipts from the National Film Centre (CNC), as well as pre-sales from Canal + and Ciné Cinéma. StudioCanal will release the film domestically on September 16 and are handling international sales.

more about: Army of Crime

Filming is imminent on the feature starring Gérard Meylan, Anaïs Demoustier and Robinson Stévenin. An Ex Nihilo production to be sold by mk2 Films

Standing tall on the firm’s line-up are Robert Guédiguian’s The House by the Sea in the running for the Golden Lion, plus movies by Sara Forestier, Joan Chemla and Mahamat-Saleh Haroun

Robert Guédiguian shooting Don’t Tell Me the Boy Was Mad 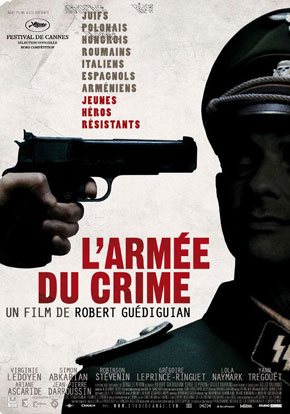