19/05/2009 - There’s no doubt that the story is a dramatic one with an ending as tragic as they come. In Milan, the young socialist agitator Benito Mussolini meets Ida Dalser

The only Italian director competing at the Cannes Film Festival, with Vincere [+see also:
trailer
interview: Cannes 2009 Marco Bellocc…
interview: Filippo Timi - actor
film profile] Marco Bellocchio offers his own personal vision of a chapter of Benito Mussolini’s life that is practically unknown to the public at large, although it is thoroughly documented in books as well as a television documentary on which the seventy-year-old filmmaker from Piacenza based his idea for the film.

There’s no doubt that the story is a dramatic one with an ending as tragic as they come. In Milan, the young socialist agitator Benito Mussolini meets Ida Dalser, a young woman from a wealthy family who had already laid eyes on him in Trento for the first time, falling madly in love; they shared the same political ideals infused with individualism, interventionism, and anti-clericalism. The future dictator marries her and legally recognises their infant son Benito. Then he enlists to fight in World War I, and that’s the last Ida sees of him. Ida, who has sold all her possessions to support her hero’s entry into politics, is anything but resigned: she shouts from the rooftops that she’s the wife Mussolini has abandoned, writing to the papers, the authorities, even the Pope himself. Mussolini, however, has gone and married Rachele Guidi, with whom he’d had a daughter, Edda, several years before.

Bellocchio sidesteps the well-known misdeeds of the fascist regime and concentrates on the persecution of one woman and her child, progressively isolated and finally locked away in insane asylums, their very existences all but erased by the Duce and his cronies..

Strongly characterised by Daniele Ciprì’s pale, chiaroscuro-laden photography, Vincere opens in Trento, with young Mussolini’s famous demonstration that God does not exist (“If He does exist, I dare Him to strike me dead with a bolt of lightning in the next five minutes”) and the story builds by means of brief episodes interlaced with the historical events, from the rise of Fascism to the Second World War. Skilfully wielding the iconography of the era and the stock footage provided by the Istituto Luce, Bellocchio overlaps and interweaves (editing is by Francesca Calvelli) the historical material with the images produced by his own camera. Everywhere in view are the signature graphics of the Futurists, with their slogans for the new era (Audacity! War is what cleanses the world!) until a dense atmosphere is created that well describes the dictatorship’s darkest, menacing dimension..

With admirable restraint, the face of protagonist Giovanna Mezzogiorno expresses the emotions of this woman who refused to compromise, who loved too well and felt betrayed, and struggled to assert her identity. The scenes of the newsreels that were routinely shown before the films in the theatres, where the reality beyond the screen is briefly glimpsed, are particularly effective. The woman observes Mussolini haranguing the crowd, using the gestures she knows only too well, and her astonishment and frustration are palpable. For his part, Filippo Timi incarnates the dictator’s psychopathology (and subsequently the suffering of the young Benito Jr.), using an experimental approach he picked up after a long association with the theatre of Giorgio Barberio Corsetti. The disappearance of his character, who is replaced by the real images of Mussolini, and the ruinous end of the physical/psychological relationship between the two lovers leave audiences with a vague sensation of a vacuum on the screen..

Vincere is an Italian/French co-production by RAI Cinema, Offside and Celluloid Dreams produced by Mario Gianani. It is opening in Italian theatres on May 20, distributed by 01; it has just been acquired for France by Ad Vitam (for the theatres) and MK2 (for television).

There’s no doubt that the story is a dramatic one with an ending as tragic as they come. In Milan, the young socialist agitator Benito Mussolini meets Ida Dalser

Edouard Waintrop, General Delegate of the Directors’ Fortnight, breaks down his 2016 selection

Lost and Beautiful by Pietro Marcello, in competition at Locarno

Shooting for Vinodentro kicks off in Trentino

The Silent Mountain: love and war on the Austrian-Italian border 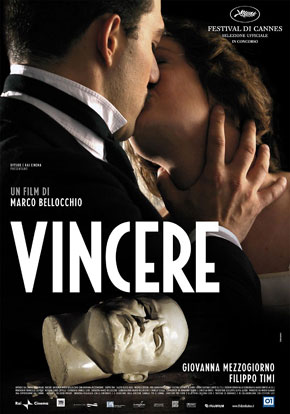