The Danish director, a previous Palme d’Or winner, once again pushes his limits with a disturbing film that is sometimes shocking and always fascinating, despite its excesses, which are a credit to the performances of its two lead actors: a remarkable Charlotte Gainsbourg and a very understated Willem Dafoe.

Antichrist opens with a musical prologue that accompanies a superb black-and-white scene describing the death of a young child who falls from a window, while his parents make love in the adjoining room. Through four chapters (Mourning – Chaos reigns – Despair – The three beggars), the film recounts the couple’s journey to the depths of hell.

The woman protagonist turns out to be much more complex than she appears at the outset, when she sinks into depression. Her psychologist husband helps her to overcome her anxiety attacks and, whilst trying to trace the root of her fears, discovers that his wife is afraid of the forest surrounding their chalet.

He decides to take her there in order to exorcise her terror. But this close encounter with nature (of the outer, but also human and inner kind) unleashes anxiety, threats, madness and horror.

An intimate family drama, the diary of a couple’s power struggles and a psychoanalytical study of guilt, Antichrist explores symbolism (the pyramid, doe, fox, black bird…), untamed sexuality, the metaphysics of good and evil, the power of nature, paranoia, satanic studies and uncontrolled violence. The film combines a multitude of themes like so many strands of the same leitmotif: the fierce battle between the conscious and unconscious during an emotional crisis.

Von Trier uses a cinematic style that follows the conventions of horror, whilst injecting his personal sense of excess based on a highly inventive, quasi-permanent, dreamlike atmosphere and a few scenes of particularly questionable taste. The work of outstanding DoP Anthony Dod Mantle also accentuates the dark beauty of the deep forest where the elements rage (torrential rain, fog, uprooted trees...).

Made up of long, dialogue-heavy sequences, the film, dedicated in the credits to Russian director Andrei Tarkovski, completely breaks with rationality in the final part, during a series of shocking scenes that doubtless surpass the understanding of some viewers, but don’t fail to elicit a reaction from them. The audience’s spontaneous response will surely delight a director in perpetual search of new cinematic experiences and tortured questionings on the alchemy of the soul and human instincts.

Produced by Denmark’s Zentropa, Antichrist was co-produced by France, Germany, Sweden, Italy and Poland. International sales are being handled by TrustNordisk.

Through four chapters, the couple’s journey to the depths of hell

“A very dark dream about guilt and sexuality”

Review: The House That Jack Built 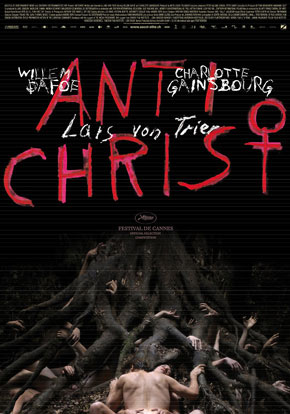