Mungiu & co. entertain in Tales from the Golden Age

The story goes that after a screening of 4 Months, 3 Weeks and 2 Days [+see also:
film review
trailer
interview: Cristian Mungiu
interview: Oleg Mutu
film profile] someone in the audience approached the director of the Palme d’Or winner, Cristian Mungiu, and said, “It’s such a shame! There are more and more films being made for festivals and fewer and fewer for audiences. Couldn’t you do something to turn the situation around?”

Thus was born Tales from the Golden Age [+see also:
trailer
film profile], a collective film in five episodes, each directed by a different filmmaker (Mungiu, Ioana Uricaru, Hanno Höfer, Razvan Marculescu, and Constantin Popescu). Starting with the ironic title itself, the film makes no bones about its intentions: re-evoke Romanians’ lives in the waning years of the Communist dictatorship (by far the worst) by means of the so-called urban legends.

Co-producer of the film with Oleg Mutu, Mungiu’s idea was a lot like those long lines to get into the stores in the Communist era: you never knew what you would find. This is why different screenings of the film will feature different combinations of episodes, so no one will see the same film.

With its directorial verve, its sarcastic tribute to the 80s in a faux-nostalgic vein, featuring period songs, styles, images, and stereotypes, Tales from the Golden Age hits the mark. It constitutes a group portrait of a people who struggle to survive, seeking some kind of rhyme or reason in the Communist Party’s directives.

Three of the five episodes highlight the comic aspects of the regime: the wait for an official visit by the party leaders winds up as a mad ride on a merry-go-round that no one is able to stop; during an visit by president Giscard D’Estaing, the official Party photographer is asked to doctor the front-page picture so that the dictator Ceausescu will look just as tall as his giant colleague; a family is gifted a live pig by their country cousin but in trying to kill the thing, with the fumes from the gas stove they blow their entire apartment to kingdom come.

The other two episodes are not such laughing matters and point the finger not only at the regime’s idiocies but also its dangers. Whoever tries to make a little extra income on the side, just to get by, or purchase goods that have disappeared from the shelves, like a dozen eggs, runs the risk of ending up in the cooler.

Whether these are true stories or just products of the Romanian imagination, or its sense of humour, is beside the point. Amazingly vital, thanks to the fact that Romanian cinema has finally found an outlet after years of silence, this film, with its variable geometry, calls to mind the Italian cinema of the 60s and 70s, as Mungiu himself pointed out: popular, immediate, and entertaining.

more about: Tales From the Golden Age

Cristian Mungiu to chair the shorts and Cinéfondation jury at Cannes

The Romanian filmmaker will be judging the films duking it out on the Croisette in May, both in the Cinéfondation Selection and the short-film competition

You can’t get much further north: Tromsø opens with Tongue Cutters

Solveig Melkeraaen's documentary from the region 350 kilometres north of the Arctic Circle will open Norway's largest film festival, which runs until 22 January

Iulia Rugina’s first feature is a successful comedy about 13 couples trying to fix their love lives with three therapists.

Why Not Productions active on all fronts

Portrait of the Fighter an exercise in dedication at TIFF 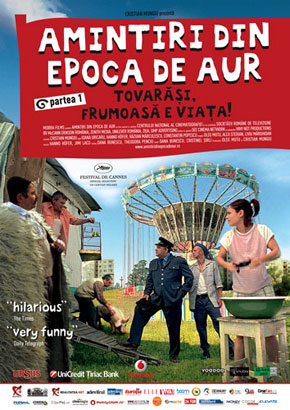