Prominent young Portuguese director João Pedro Rodrigues, whose second feature, Two Drifters [+see also:
trailer
film profile], screened in the Directors’ Fortnight in 2005, returns to the Croisette with To Die Like a Man [+see also:
trailer
film profile], showing in Un Certain Regard. This is a fitting choice of section for a filmmaker with such a radically original vision.

The film looks at the tragic life of an icon on Lisbon’s transvestite scene, Tonia, who has completely abandoned her masculine identity and radically embraced her femininity through physical transformations that leave her fatally infected. Tonia has nonetheless never gone through with the operation by which her metamorphosis would be complete, for she has assimilated, in the form of a religious faith, some of the social taboos that have marginalised her. This is why she wants, in a final, rather superb act of defiance, "to die like a man".

Rodrigues’ approach echoes that of his heroine in that his directorial choices completely embrace his subject matter. Here he delivers a quintessential melodrama (which revolves around the thoroughly excessive, beautiful and painful love between Tonia and Rosario) against the backdrop of a musical comedy centred on the intimate side of transvestite shows.

Recurrent motifs include a fondness for fragile flowers that require lots of tender care and, on the other side of the spectrum, scenes that crudely underline the corporeality of the characters’ lives.

The director’s aesthetic choices befit his subject, including the highly choreographed sequences (right from the start, where we witness some soldiers in rather rococo camouflage attire at the slow night ball), the tableaux vivants where the characters are motionless, sometimes for the length of an entire song, and the use of blue and red filters, replaced in the final scene by an extreme overexposure of the image. This aestheticisation of the transsexual theme is encapsulated by the extravagantly elegant character Maria Bakker, who lives with her comically submissive partner Paula, in a deep, dark forest reminiscent of Hawthorne’s The Scarlet Letter.

In To Die Like a Man, Rodrigues plunges us into the shimmering night of this hidden world which can only appear in the open, in the blinding white light of day of the final scene, once stripped of its colours.

The Ornithologist, a surreal reflection on spirituality

LOCARNO 2016: The latest endeavour by Portuguese director João Pedro Rodrigues is a boundless journey into the mind of an ornithologist in search of spirituality, mysticism and eroticism

The Last Time I Saw Macao is competing for the Golden Leopard at the Swiss event, that is also to give tribute to the Vila do Conde Short Film Festival

Portuguese cinema in a state of emergency

Sasha goes it alone in this week’s line-up

In this week’s low-key line-up, the only new German title, Sasha, is distributed by Salzgeber, a company specialised in auteur films whose recent releases include Sébastien Lifshitz’s Going South... 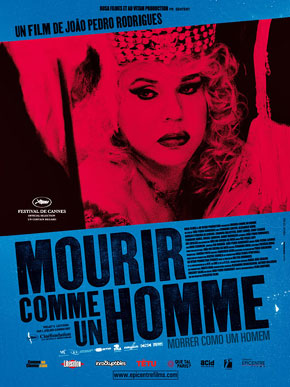