11/06/2009 - Brilliantly adapted for the big screen from a TV series, this highly original Belgian debut animated feature was unveiled out of competition at the 2009 Cannes Film Festival

Making the transition from shorts to features always requires a different approach. It involves coming up with a longer storyline, adapting one’s narrative style, developing well-defined characters and above all, changing the pace. The manic rhythm of a ten-minute episode cannot be maintained for over an hour without making viewers’ heads explode. A different pace needs to be found.

Stéphane Aubier and Vincent Patar, along with their co-screenwriters Vincent Tavier and Guillaume Malandrin, worked for three years on the script of A Town Called Panic [+see also:
trailer
interview: Stéphane Aubier and Vincen…
interview: Stéphane Aubier & Vincent P…
film profile], writing, polishing their story, gags and dialogues, and carefully using just the right amounts of their magic potion within the given time. The film benefits greatly from the quality of this preparation. The screenplay has a varied tempo, ranging from adagio to allegretto, which is skilfully controlled by the directors throughout the film, thus creating the fluidity necessary for a successful feature.

There is a real story, which goes well beyond a mere succession of comic incidents. The characters of Cowboy and Indian, those troublesome and clumsy kids, are fleshed out. Horse, their grumpy big brother, who acted as a mere foil, now has his own private and romantic life.

One of the main additions to the film is Madame Longrée (voiced by Jeanne Balibar), a newcomer to the boys’ world. This adorable filly with a sensual voice and stylishly elegant scarves, is a piano teacher (a little far-fetched, perhaps, for a hoofed animal) who has a passionate and romantic love affair with Horse.

The secondary characters also become real actors, more subjects than objects of the story. For example, when Steven is in prison, Janine develops another side of her character, emotions and actions, which was impossible in the TV series.

The directors’ great strength is that, throughout the film, they successfully preserve the overall tone developed in the series, which has the effect of a true Proustian madeleine, plunging us back into the innocence of childhood. Through these figurine toys, we watch a child play. We imagine the points of reference (parents, teachers, friends) that he more or less consciously uses as inspiration for his characters. We delight in the unusual relationship with reality, consisting on the one hand of simple but strong logic, and on the other, of a total lack of coherence.

We’re struck by the little rascal’s relationship to the world, which is not simplistic or meaningless, as he becomes aware of his environment and reproduces, more or less, what he perceives. There’s Indian ordering bricks on the Internet, Steven on his tractor leading the animals to pasture while Policeman handles the traffic flow, Horse who drives off in his car to pick up the animals at their piano lesson, at the music academy, and the cowshed where the three protagonists are invited to sleep after the loss of their home, which is like a holiday camp dormitory. It’s these elements, of course, much more than the twists and turns of the story, which make viewers fall under the film’s spell, drawing them in and ensuring they stay glued to the screen throughout.

Without taking themselves too seriously, friends Aubier and Patar have used their solid expertise to develop a richer and more elaborate idea. Moreover, they clearly enjoyed themselves in the process and share this enjoyment with viewers.

more about: A Town Called Panic

“All the characters have evolved with respect to the series”

Ernest & Célestine on their way to the Oscars

Jacques a vu: divine visions in the first feature film by Xavier Diskeuve 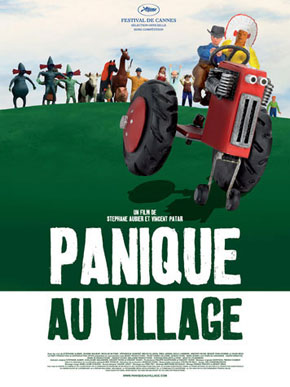