10/09/2009 - After participating at Cannes, in the Directors' Fortnight section, 33-year-old Bulgarian debut director Kamen Kalev accompanied his film Eastern Plays to festivals around the world

After participating at Cannes, in the independent Directors' Fortnight section, 33-year-old Bulgarian debut director Kamen Kalev, a Femis graduate with various shorts to his name, accompanied his film Eastern Plays [+see also:
trailer
interview: Kamen Kalev
film profile] to festivals around the world, including Thessaloniki, Melbourne and Tokyo. The film is now among the three finalists for the European Parliament Lux Cinema Prize.

A Bulgarian/Swedish co-production (Waterfront, The Chimney Port and Film i Väst), the film is set in Sofia among neo-Nazis and simmering racism and centres on brothers Georgi (Ovanes Torosian) and Itso (Christo Christov).

After having lost contact with one another years ago, the two meet coincidentally when a gang of neo-Nazis attacks a Turkish family, but on opposite sides. Whereas Georgi has been recently recruited by the violent gang, Itso is wounded when he tries to defend the Turkish girl, with whom he will fall in love.

Eastern Plays looks at an Eastern European country undergoing change and in search of its identity, explored with realism and sombre lyricism. It is also the study of a family full of hidden contradictions. The protagonist Christo is a lost boy in search of redemption, a failed artist who has been battling for a long time with anxiety and depression and is trying to recover after years of heroin addiction. Kalev has created a character with depth and many nuances, often contrasting but always credible, from frustration to irony, from detachment to warmth. In the same way, the ideological differences between the two brothers are analysed without being overly schematic.

The director wrote the film around real-life events that happened to his childhood friend Christov, whom he then chose for the lead. The young man died in an accident just days after shooting ended."I used many elements of Christo's life in my story," said Kalev. "Most of the scenes actually took place and were shot in the places where he lived: his apartment, his streets, his workplace. Christo is no longer with us, but his vibrant strength in the film suddenly entered real life".

Besides ethnic discrimination, the film's central theme is the possibility of communicating and having relationships with others: "This is the real coming together of two souls; here language, creed and eye colour don't matter. But when appearance comes to the fore" the director concludes, "relationships lose their strength and love disappears". The international sales rights for Eastern Plays have been acquired by Memento Films International.

After participating at Cannes, in the Directors' Fortnight section, 33-year-old Bulgarian debut director Kamen Kalev accompanied his film Eastern Plays to festivals around the world

“I wanted to understand how confusion and alienation were born”

Besides the documentary aspect of a main character played by a non-professional actor and his real, tragic fate, Kamen Kalev’s feature debut has a wider concept and message

Bulgaria's Kamen Kalev plunges into timelessness and explores the union between man and the earth through a fascinating and austere environmental film, recipient of the Cannes 2020 label

It’s February in June for Memento at Cannes Online

The French sales agent’s line-up includes the new film by Kamen Kalev, endowed with the Official Selection label, and the forthcoming titles by Leah Purcell, Hany Abu-Assad and Asghar Farhadi

The Paris-based company will be selling the feature debut by Turkish director Serhat Karaaslan, which is being co-produced by Germany’s Departures Film and France’s Silex Films 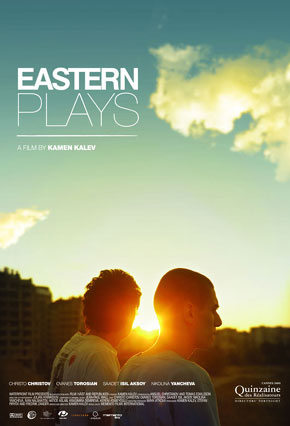