This isn't the first time that Schmid - who was born in 1956 into a liberal family, studied film directing at Munich's Hochschule für Fernsehen und Film and screenwriting at the University of Southern California in Los Angeles, started producing films in 2004 for his company 23/5 Filmproduktion, and is a Green Party activist - has tackled a socially and politically engaged film. In Distant Lights (2003), the director redefined the borders of the "Fortress of Europe" to describe the unease of Eastern Europeans who experienced difficulties and failures whilst seeking a better life in unified Germany.

In the classic tradition of the institutional-legal thriller, Storm [+see also:
trailer
interview: Alexander Fehling
interview: Hans-Christian Schmid
film profile] (his third outing at the Berlinale, where it was warmly received by audiences and critics) recounts the bitter experience of Hannah Maynard, prosecuting lawyer at the ICTY (played by New Zealand actress Kerry Fox, made to look older for the role). In the course of the trial against Goran Duric, an old commander responsible for the deportation and death of Bosnian Muslim civilians, she discovers, following the suicide of a witness, the hidden and denied existence of one of many hotels that were the scene of ethnic rapes and massacres. The deceased witness' sister, Mira (the outstanding Anamaria Marinca of 4 Months, 3 Weeks and 2 Days [+see also:
film review
trailer
interview: Cristian Mungiu
interview: Oleg Mutu
film profile], who here performs in English, German and Bosnian) could, however, shed new light on the issue, revitalising her career, now on the wane: but this woman has decided to forget and start a new life.

The complex web of diplomatic exchanges, against the backdrop of the tangled, bureaucratic and suffocating system of relations at the highest levels of the European Union, will veto a matter that risks blocking continental politics, through to a dramatic ending that leaves audiences depressingly unsure about the true possibility of justice.

Within the traditional, solid genre structure - full of court scenes and intrigues - Schmid introduces the contrast between a tragedy of history and the tragedies of its protagonists' personal stories. However, the narrative runs counter to this, and doesn't succeed in striking a balance between political strategies and sudden developments and its main subject, the war in former Yugoslavia and the work of the ICTY, often remains in the background compared to the rest.

To give greater freedom of movement to the actors and emphasise the most dramatic moments, the director, who shot the €6m film in Sarajevo, Berlin, Cologne, Sweden's Trollhättan studios and Holland, used mainly handycam, to good effect.

Interview with the shooting star Alexander Fehling, who had a supporting role in Quentin Tarantino's Inglourious Basterds.

“What we can do is create awareness among the general public”

The German director attended the press conference for Storm, shown in competition at the 59th Berlinale. These are extracts from statements that reveal a committed filmmaker

It’s time for a Quiz on Dutch screens

Just ahead of the institution’s 20th anniversary, Filmstiftung NRW has presented the best annual accounts in its history and continues along the successful path that has led it to become the... 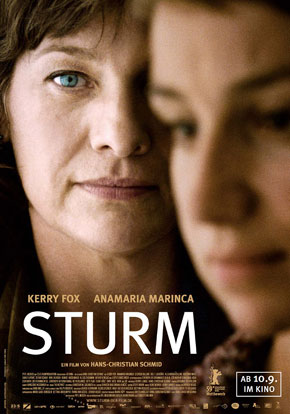