24/09/2009 - An initiation into the art of growing old with humour from the ages of 14 to 80, all the symptoms of early or late decline are revealed with refreshing irony in this feel-good comedy

In a crowded end-of-day bus in Zurich, three women symbolising the spring, autumn and winter of life don’t know that they will experience a memorable evening. Fourteen-year-old Jessica (Elisa Schlott) is about to commit petty theft with her friend Fatima and end up at the police station, where her separated parents will come to pick her up, whilst tearing each other apart. Her dream is to turn 18, be able to do whatever she wants and die by the age of 24 at the latest, like James Dean.

Lilli (Renate Becker) is about to celebrate the 80th birthday of her friend Leonie (Christine Schorn), who is shut away in an old people’s home by her uptight daughter. The latter has always been ashamed of her mother, who swam topless in 1968, and will do much worse this evening.

Half-heartedly, Julia (an outstanding Corinna Harfouch) is on her way to meet some friends in a restaurant to celebrate her 50th birthday. "We old people are invisible", says Lilli as she sits down next to Julia, whose expression suddenly wavers, as if caught between the self-confidence of youth and the resignation of old age.

Julia doesn’t wander for long in the land of invisible old age. After her chance meeting with whimsical and enigmatic John (Bruno Ganz), she follows this inimitable charmer to a bar where she offloads the burden of her age.

Directed by Christoph Schaub and brilliantly penned by screenwriter Martin Suter, Julia’s Disappearance [+see also:
trailer
interview: Christoph Schaub
film profile] (Giulias Verschwinden) is an ensemble comedy whose high-quality, subtle and humorous dialogues soon wins over viewers. This because the writer is no amateur. Suter has won acclaim in both Switzerland and France, where his novel Small World won the Best First Foreign Novel Prize in 1998.

His other works include Un Ami Parfait (“A Perfect Friend”, adapted into a film by Francis Girod), Lila, Lila, A Deal With the Devil and Le Dernier des Weynfeldt. He also wrote the screenplay to two films by late Swiss director Daniel Schmid (Off Season and Beresina, or The Last Days of Switzerland).

At 61, Suter has the necessary hindsight to explore ageing at different stages in life. Jessica, for example, defies the law by stealing a pair of gold trainers for a friend, but has lots of rules for her parents, who are denied the right to use "youth-speak".

Meanwhile, Julia’s 50-something friends, who are left waiting at the restaurant, mock today’s youth – "retirement homes full of tattooed old women with body piercings, how lovely!" – but can’t hide their fear of decrepitude when they quibble about their jogging, Tai-chi, sworn enemies (milk products, eggs, meat, alcohol and cigarettes) and lifelines (hemp seeds apparently work wonders!). "At this table, nobody has a problem with their age, but everyone talks about their health", comments tiresome guest Alessia (Sunnyi Melles), who is a face-lift enthusiast.

Like ice-breakers, the Julia-John duo and Leonie, the old lady who is supposed to "act her age" and hates mixed choirs and her daughter’s constant moralising, open the way to more temperate waters to grow old painlessly in this heart-warming, feel-good comedy.

An initiation into the art of growing old with humour from the ages of 14 to 80, all the symptoms of early or late decline are revealed with refreshing irony in this feel-good comedy

“Fully savour every period of life”

After a successful stint at comedy, the Swiss director was handed a brilliant screenplay by Martin Suter, which subtly and humorously explores the different ages of life

“On the verge of despair”

After the public and critical success of Giulia's Disappearance, director Christoph Schaub has once again joined forces with bestselling writer Martin Suter for Lullaby Ride.

A thriller and waking nightmare about an infant stolen along with its parents' car.

Hands and Ganz to star in Sport de filles

Next Monday marks the start of lensing on Sport de filles (“Girls’ Sport”) , the third feature film by Patricia Mazuy, whose talent was revealed with Peaux de vaches (1990 César nominee for Best...

Since its creation in 2005, the Zurich Film Festival has aimed to establish itself as an important national event: distinguished guests invited to the festival have included Roman Polanski, who...

Lacklustre results for Swiss films in 2009 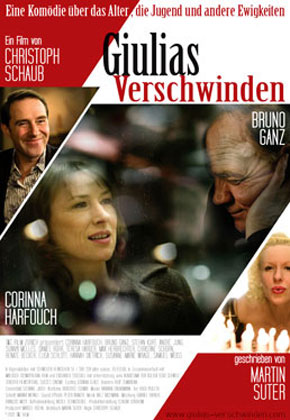