13/10/2009 - Mysterious events disturb the seemingly well-ordered life in a German village in 1913. A sumptuous black-and-white film crowned with the Cannes Palme d'Or 2009

A regular in competition at the Cannes Film Festival since 1997 and winner in 2001 of the Jury Prize for The Piano Teacher, Austrian filmmaker Michael Haneke uses rigorous b&w for his latest film, The White Ribbon [+see also:
trailer
interview: Michael Haneke
film profile], after his US foray in 2007 for the remake of his 1997 film Funny Games.

The white ribbon of the title is what the strict Protestant preacher (Burghart Klaussner, Good Bye Lenin! [+see also:
trailer
interview: Wolfgang Becker
film profile], The Reader [+see also:
trailer
film profile]) of an isolated village in northern Germany in 1913 ties around his son’s wrist and into his daughter’s hair so that they will remember to preserve their purity and stay away from sin and temptation.

Purity and integrity are precisely the virtues that seem to have disappeared from this village, to make room for "malice, apathy, brutality and envy", to quote the baroness (Ursina Lardi) from the film.

Through the elderly, off-camera voice (Ernst Jacobi) of the local schoolteacher (newcomer Christian Friedel) we are slowly introduced, many years after the fact, to all of the inhabitants of this ante litteram “German Peyton’s Place”. The aforementioned preacher, doctor (Rainer Bock), baron (Ulrich Tukur, The Lives of Others [+see also:
film review
trailer
interview: Florian Henckel von Donners…
interview: Ulrich Muehe
film profile]) and baroness, their steward (Josef Bierbichler), midwife (Susanne Lothar), farmer (Branko Samarovski) and all of their children. The latter, both the smaller one and the adolescents, seem to immediately play a primary role, victims and perhaps victimizers in this in merry-go-round of hypocrisy.

The teacher, who not being from the place is an observer, quickly introduces viewers to the first of a series of incidents that seem to be a vengeful and ritualistic punishment. Someone tied a rope between two trees, making the doctor fall while horseback riding and break his bones. And who attacked the baron’s child? Who ferociously blinded the midwife’s handicapped son?

The police get nowhere with their investigation. No one speaks. Too great is the fear of crumbling this micro-society that is held precariously together only through social and religious conventions. Each family hides a secret. The doctor has a tired and unhealthy relationship with midwife and an even sicker one with his daughter. The baroness tells her coarse husband she wants to leave him because she is in love with a kind, wealthy Italian. And the inflexible preacher is indirectly responsible for the aggression that spreads in the village.

Sex and death, which have traversed Haneke’s Freudian cinema since his debut, go head to head in this closed, oppressed microcosm, shot with cold severity by Christian Berger. The delicate relationship between the teacher and the young Eva (Leonie Benesch), hired to look after the baroness’ little twins, represents a possible innocence in a world without salvation. WWII is at the gates and perhaps only its absolute violence can sweep away, as Futurist motto states, all inner evils. Yet the children of that village of the damned are nothing more than future recruits of the Third Reich.

more about: The White Ribbon

Mysterious events disturb the seemingly well-ordered life in a German village in 1913. A sumptuous black-and-white film crowned with the Cannes Palme d'Or 2009

"An ideal raised to the status of an absolute becomes inhuman"

Interview: Manu Gómez • Director of Once Upon a Time in Euskadi

“I don’t agree with Hitchcock” 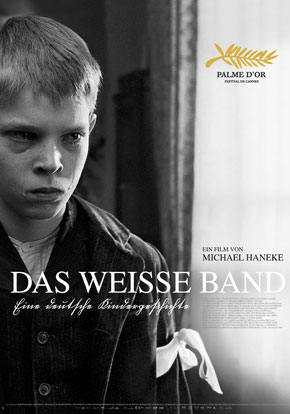