Winterbottom, an Englishman in Genova

“Making the same film over a long period of time is boring,” says Michael Winterbottom, an Englishman at ease in every part of the world – the geography of his films has ranged from Yugoslavia (Welcome to Sarajevo) to Pakistan (In This World) – and with every genre (historical, political, sci-fi, documentaries). For his latest film, for now (he’s currently in post-production with new Hollywood titles), he sets the action in Italy.

Genova [+see also:
trailer
film profile] tells the story of the mourning process of Joe (Colin Firth) and his daughters Mary and Kelly. After the death of his wife (in a car accident for which the younger Mary feels entirely responsible), the family moves to Genoa from the US.

The director claims the city is not simply any location but a place that – with its simultaneously picturesque and threatening alleyways and the magnificent seaside surroundings, thoroughly explored by the HD cinematography of Danish DoP Marcel Zyskind – “truly gave rise to the idea, because in any other part of the world the film would have been completely different”.

Produced by Revolution Films and FilmFour, with much backing from the Liguria Region and the local film commission (thanks also to the character played Catherine Keener, Joe’s pedantic colleague who helps the family discover the area’s artistic and natural treasures), Genova – which won Best Director at San Sebastian 2007 – is a new chapter in the sentiment that binds European filmmakers to Italy.

More than Wim Wenders’ Palermo Shooting [+see also:
trailer
film profile], however, Winterbottom looked to his fellow countryman Nicolas Roeg’s Don’t Look Now (1973) for inspiration. “In some ways, Venice is the twin city to Genoa, and the characters faced the disappearance of a loved one in that film as well,” he said.

“However, more than pain or tragedy, I wanted to depict the love that unites the characters and their adapting to a place that is not their own, to a city and language foreign to them,” concluded the director. It’s a shame that most of this feeling of confusion, especially linguistically speaking, is lost in the Italian version in which everyone is unfortunately dubbed, including Mary and Kelly.

Genova will be distributed on October 16 on approximately 16 prints by Officine UBU.

From Buenos Aires to Boulogne-sur-mer in The Tango Singer

Many Belgian distributors seem to have held back this week, as they wait for the girly tidal wave of Sex and the City 2 to subside. There are nonetheless two European productions in the line-up to...

Winterbottom, an Englishman in Genova

“Making the same film over a long period of time is boring,” says Michael Winterbottom, an Englishman at ease in every part of the world – the geography of his films has ranged from Yugoslavia...

Surfing the recent waves of hot weather, the Ostend Film Festival (August 19-25) is an ideal and entertaining summer festival, set in a seaside location. The ten-day event will host a series of...

Winterbottom as busy as ever

The offbeat humour continues in OSS 117, Rio Ne Répond Plus 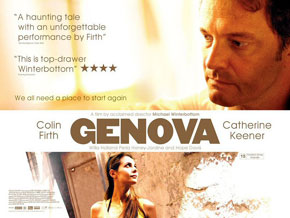