02/11/2009 - A Polish debut feature acclaimed by critics, crowned with seven Lions at Gdynia and the Grand Prize at Warsaw, and selected to represent Poland in the 2010 Oscar nomination race

Even before its theatrical release, Borys Lankosz’s debut narrative feature The Reverse [+see also:
trailer
interview: Agata Buzek - actress
interview: Borys Lankosz
film profile] has got off to an exceptional start, winning seven Golden Lion statuettes at the Gdynia Polish Film Festival and the Grand Prize at the Warsaw International Film Festival. It was selected as Poland’s submission in the race for the 2010 Best Foreign Language Film Oscar nominations. This unexpected avalanche of honours is accompanied by an enthusiastic response from festival audiences and critics ("initiator of the new Polish Film School", "promising director of new Polish cinema", "the true discovery of recent years", "a phenomenal director").

Writing in Film magazine, one critic even compared Lankosz to Polish film master Andrzej Munk (1921-1961; director of Bad Luck and Heroism, among other films). Although debatable, this comparison is not unfounded. After 14 years of inactivity, The Reverse is in fact the first film produced by legendary studio KADR, which fostered the generation of masters belonging to the famous Polish School (Munk, Jerzy Kawalerowicz, Janusz Morgenstern, Andrzej Wajda and Kazimierz Kutz).

Moreover, few observers could deny that The Reverse (by a relatively young, 36-year-old director) looks like the work of an experienced filmmaker, whilst showing a sharp creative awareness and a strong sense of cinematic form and the expectations of a demanding audience.

The film’s starting point, its screenplay, is a triumph in itself. Its creator, Andrzej Bart, who is considered one of Poland’s most important contemporary writers, has constructed a complex story with multiple meanings. Lankosz makes skilful use of this patchwork and invites viewers into a sort of game with cinema itself, narrative and genres (from melodrama to black comedy and thriller). In the words of the film’s male lead, Marcin Dorociński, this is "a script to make the imagination run riot".

At first glance, however, the plot seems banal: three women (spanning three generations) try to find a suitable husband for the youngest among them, Sabina (Agata Buzek), a 30-year-old editor. This search proves difficult because the potential suitors who, one by one, cross the threshold of the women’s house, don’t meet their expectations. Until the day Sabina crosses paths with a charming and enigmatic man (styled like Humphrey Bogart). The film’s real action will revolve around this encounter.

Stylisation is, moreover, an important element of The Reverse, which is set in the 1950s in the social-realist landscape of Warsaw. Cinematographer Marcin Koszałka’s black-and-white images, the reality of the era meticulously recreated in the studio, the costumes, make-up and Włodek Pawlik’s jazz score repeatedly take viewers on a journey back in time to German expressionism, classic film noir, Hitchkock and even Marc Caro and Jean-Pierre Jeunet’s Delicatessen, in what amounts to a true ode to cinema.

But what is intriguing about The Reverse is not only its sophisticated form but above all its intellectual playfulness. The director overturns genres, as well the usual perception of history and the clichés about human destiny being determined by the reality of an era.

Lankosz exposes the fundamental pillars of the communist system: lies, compromise and treachery. At the same time (in a rare move), he doesn’t use a hero’s perspective, but an honest, authentic and unpretentious idiom. The "bronze monument", this classic vision of history against a backdrop of heroic suffering and sacrifice, is literally overturned thanks to the subtle irony, humour and masterful images.

more about: The Reverse

Polish audiences have considered her a star since she played Sabina in Borys Lankosz’s The Reverse, which earned her Best Actress at last year’s 34th Gdynia Polish Film Festival

Interview with the new star of Polish cinema, a director who started out in documentaries and decided to play with the conventions of narrative film

A Polish debut feature acclaimed by critics, crowned with seven Lions at Gdynia and the Grand Prize at Warsaw, and selected to represent Poland in the 2010 Oscar nomination race

5 completed films, 9 works in progress and 11 projects in development are on the menu of the New Horizons Film Festival’s professional rendezvous 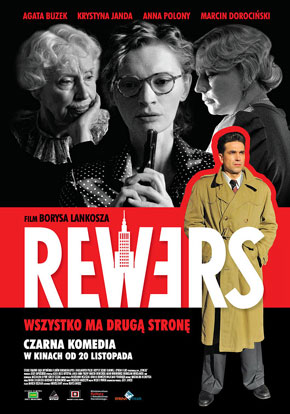