Using technology to play with destiny in Lopes’ Twist of Fate

Seventy-three-year-old Portuguese director Fernando Lopes presented the premiere of his latest work, Twist of Fate, at the Estoril Film Festival. The comedy on the pleasures and displeasures of daily life was very warmly received by audiences.

The film centres on Carlos (Rui Morrison), a middle-aged man and father of a 30-year-old son, a faithful husband and good worker, a lover of boleros and good cooking who absolutely loathes technology. One day, despite his aversion, Carlos reads a text message received by his beautiful wife Ada (Ana Padrão), and discovers a certain Manuel B in her life, with whom it would seem she spends moments of burning passion.

Carlos soon figures out who Manuel B (Milton Lopes) is, goes to his house, gets to know him, initially detests him then ends up becoming his friend. In alternating comic and paradoxical situations, Carlos’s life is turned completely upside down, so much so he’s forced to use and abuse technology (he taps his wife’s phone). He thus abandons his principles and is dominated by the power of the cell phone, which with its invasive ringer becomes the undisputed protagonist of every situation.

The main character of Twist of Fate realizes that relationships are hanging by a thread or, rather, by the virtual waves through which one can discover unimaginable truths and nourish unlikely friendships. But the truth is that the capacity to reinvent the quotidian, overturn situations and transform dramas into comedies is very much human, and is the product of the interaction between animal instinct and cerebral power, which no machine will ever be able to replace.

We can only hope, as Lopes does, that the coldness of the virtual world is not so strong as to freeze our ability to play with destiny. For the time being, all we can do is laugh, technology permitting.

Twist of Fate, which will be released locally this Thursday by Atalanta Filmes, was produced by Paulo Branco for Clap Filmes, in collaboration with the Instituto do Cinema e do Audiovisual (ICA) and Rádio e Televisão do Portugal.

more about: Twist of Fate

Using technology to play with destiny in Lopes’ Twist of Fate

Seventy-three-year-old Portuguese director Fernando Lopes presented the premiere of his latest work, Twist of Fate, at the Estoril Film Festival. The comedy on the pleasures and displeasures of... 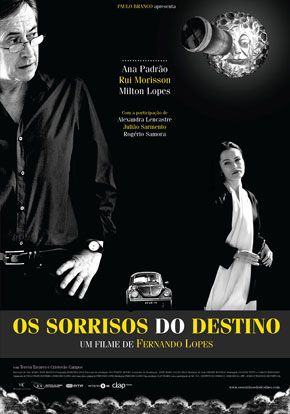