21/01/2010 - With a measured approach and secular curiosity, the Austrian director tackles one of the major themes of Catholic orthodoxy, the miracle, through a young paraplegic’s "journey of hope"

Cinema and the sacred have always been profoundly intertwined and great film masters have been drawn to the subject of spirituality and the aesthetic and symbolic richness of religion: Bresson, Dreyer, Rossellini, Pasolini (more than any other and in conflict with Catholicism), explored the link between the transcendental, myth and death. Postmodern cinema went on to reject God (Star Wars) or exploit him (Mel Gibson), but always returned to new forms of spirituality.

With a sober and measured approach, but not without a lively curiosity, 37-year-old Austrian filmmaker Jessica Hausner tackles the subject through one of the traditional themes of modern Catholicism, the pilgrimage to Lourdes. Her film, simply entitled Lourdes [+see also:
trailer
interview: Jessica Hausner
film profile], recounts a few days spent in France’s second most-visited city (with its 230 hotels and over 6m visitors per year) by a young woman, Christine, who is confined to a wheelchair by multiple sclerosis. She is played by Sylvie Testud, who prepared for the role by working with paralytics and physiotherapists.

Accompanied by volunteers from the Order of Malta, Christine travels through this highly-organised system, a sort of smooth-running "Disneyland of miracles", as it’s been called, with its four basilicas. These include an enormous, underground basilica which hosts up to 25,000 worshippers, houses the 16 pools in which the sick immerse themselves, as well as open spaces for mass gatherings, the tent for the Eucharistic Adoration and the confessional building.

To the young volunteer, Maria (Léa Seydoux), who assists her and asks her why she has come to Lourdes, Christine replies that it is the only way to travel and meet people. Christine thus has a wary attitude and probably isn’t expecting much from this place. The isolation caused by her illness is experienced as a punishment. She could have had a family, job and friends, but instead feels totally useless. And she watches with envy as Maria flirts with the young, male volunteers.

When the "miracle" occurs and Christine slowly gets up from her chair like a risen Lazarus, the pious women wonder "but why her and not somebody else?", showing little Christian charity but an immense credibility. And they receive a rather vague answer when they ask the same question to the priest accompanying them.

It is irrelevant whether Christine is cured or whether this is merely an improvement in her condition before a relapse, as the doctors on the miracle committee conclude. Hausner is interested in showing the ambiguity and cruelty of this phenomenon, without engaging in iconoclastic provocations. She commented at the Venice Film Festival: "For me, this film has been a journey of research, at the end of which I’ve discovered that if there is a God, he’s unfair".

Christine glimpses the possibility of giving meaning to her life, and experiences a moment of happiness. It doesn’t matter if the world (or God) is unfair. As Father Nigel says in his futile attempt to alleviate the protagonist’s suffering, "In a sense, we are all strapped in a wheelchair".

A shocking Lourdes, between the sacred and the irreverent 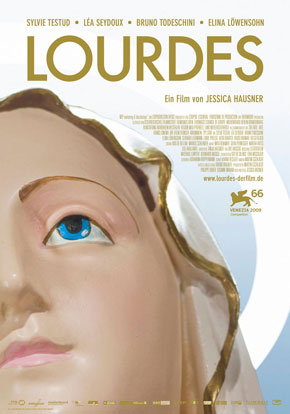