One of the most interesting films to emerge from the Baltic area in years, Jaak Kilmi's Disco and Atomic War [+see also:
trailer
film profile] is billed as docu-fiction. Actually, it's more of a combination of archive footage, interviews and reconstructions of past events, but that doesn't decrease its quality, and neither does the slightly misguiding title.

Disco tells a very interesting and not widely known story about a propaganda war that took place from the mid-1950s until the collapse of the USSR. Finland was a Western country completely in the Soviet clutches and no decisions were made without instructions from the Kremlin.

When the Soviet authorities established Soviet Estonian Television (SET) in Tallinn in 1955, Finland did not yet have its own TV station. But as Helsinki is only 89 kilometres from Tallinn across the Gulf of Finland, the Finns could easily watch SET. It soon turned out that the Soviets were using the station for communist propaganda, directed more at the Finns than intended for pastime of the Estonian population.

When the US Foreign Office got word of this, they funded the creation of TV Helsinki in 1957 and the propaganda offensive turned the other way. The Estonians now got a window into a thus far unknown world.

Technical difficulties were overcome by illustrious characters who were building special condensers for Soviet-made TV sets, which were of a different standard than those for signals emitted by Finnish TV, and this is the part of film's reconstructions. The long tracking shots from apartment to apartment in Tallinn, of families trying to get the best possible reception in inventive and funny ways, are reminiscent of the camera work in Roy Andersson's films and work in perfect counterpoint to black-and-white archive footage of shows from SET and TV Helsinki.

That's where disco comes in. When it boomed in the 70s in the West, the Estonians started copying it and Soviet authorities were forced to introduce a new kind of disco because the western one had already established strong roots. But the biggest event was that Tallinn could watch the first major soap opera, Dallas, when it appeared in 1978.

Needless to say, this cultural shock turned many Soviet minds around. As Finnish TV could be seen in Tallinn, but not in the south of the country, Kilmi, in elementary school at the time, would write up each episode and mail it to his sister living in the south. The reconstructed scenes of her reading out the letters to gathered friends and neighbours are priceless and the absolute highlight of the film.

Estonian-born Kilmi takes the tradition of Finnish documentary into the context of the communist past of a New Europe with magnificent results. The film is fantastically entertaining and thoroughly informative, a real treat for viewers of all preferences. He is definitely a filmmaker to watch.

more about: Disco and Atomic War

Christ Lives in Siberia: The idyllic nature of faith

That’s IT! for Estonian film

What is being described as the ‘first folk-film in history’ will premiere in Estonia on 11/11/11 as feature film That’s IT! will screen at over 110 cinemas across the country. Created by more than...

Tallinn becomes a New World thanks to new documentary

Documentary Uus Maailm (The New World) received a rapturous reception as it was given its premiere at Tallinn’s Coca-Cola Plaza last Thursday night. Directed by Jaan Tootsen and produced by Jaak...

After two years of cutbacks in public funding that brought film production to a near standstill last year, 2011 looks rosier for Estonian cinema. Eight films will hit local screens (against four...

22 European titles in competitions at Palic

Founded in 1992, the Palic Film Festival near Subotica, in northernmost Serbia, in 2003 became the Festival of European Film Palic and a member of the European Coordination of Film Festivals. As...

One of the most interesting films to emerge from the Baltic area in years, Jaak Kilmi's Disco and Atomic War is billed as docu-fiction. Actually, it's more of a combination of archive footage,...

The 13th Black Nights Film Festival in Tallinn, Estonia, the biggest film festival in the Baltic region, opens this Thursday, November 27, and will run through December 6. A total of 21 European... 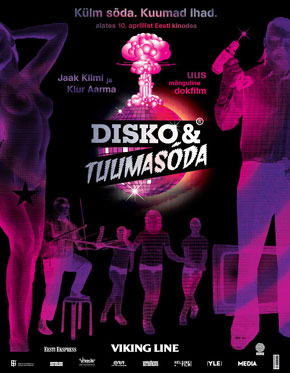