If I Want to Whistle a drama on Romania's lost generation

The deaf desperation of an entire generation of If I Want to Whistle, I Whistle [+see also:
trailer
interview: Ada Condeescu
film profile], the feature debut of Romanian director Florin Şerban, was received to applause yesterday in the Berlinale Palast, at its premiere screening in Official Competition.

The dry, harsh story of the difficult situations of juvenile detention centres initially came about from a play, after a visit to a juvenile jail. Ten years later, the script based on the play changed drastically, until its definitive structure, when the director and his screenwriter began working with inmates of one of the centres.

All that remained from the original piece was the title and underlying concept, focused on freedom, compromises and accepting responsibility and its consequences, but the characters were developed autonomously, and updated to today.

The film covers the five days that separate Silviu, 18, from his freedom from the reformatory. Raised an orphan like many of his peers, with a younger brother to care for who is in bad shape, Silviu is one of many boys abandoned by their mothers, who left the country to find work abroad. In order to be released as quickly as possible, Silviu swallows his pride and accepts all kinds of humiliation from the other detainees, and becomes infatuated with a social worker, Ana, with whom he hopes to have a relationship once he’s out.

Things come to a head, however, when his mother returns to Romania and decides to take her younger son with her to Italy. Silviu’s rage explodes, and the boy barricades himself in the jail kitchen, taking Ana as a hostage.

At the film’s press conference, the director emphasized how the disintegration of families following the exodus of many Romanian women abroad has created a true generational disaster. "Many Romanian woman emigrate to find work in the West, and after 10 years the results are evident: enormous problems among kids who raise themselves or with faraway parents," he said.

Şerban, who spent two months in a juvenile detention centre in order to finish the script, describes the characters with great psychological finesse, in particular the delicate Silviu (newcomer George Piştereanu), a vulnerable dreamer despite his aggressiveness, crushed in the web of the prison’s hierarchies.

The camera often follows the characters from behind, an approach chosen by the filmmaker because "in prison I realized I couldn’t reach the souls of the kids, there was too much behind their words. There are things that happen at night, when the lights are turned off and the guards are gone, but [the kids] don’t talk about them. I tried to stress precisely those moments we’re not authorized to see".

The film is a Romanian/Swedish between Catalin and Daniel Mitulescu’s Strada Film and Film I Vast (who handled post-production) and The Chimney Pot, with funding from the Romanian Film Centre, Swedish Film Institute and Post Republic Berlin, and was pre-sold to Romanian broadcaster TVR.

The film won the CineLink Work in Progress Award at the 2009 Sarajevo International Film Festival and is being sold by Celluloid Dreams.

more about: If I Want to Whistle, I Whistle

Interview with Ada Condeescu, actress in Florin Serban's If I Want To Whistle, I Whistle that premiered at the 2010 Berlinale

Florin Şerban in post-production with his third feature, Love 1: Dog

The three-character story is set in 1930s Romania

By the Rails: No simple answers in matters of the heart

The festival will raise its curtains on 6 November with the Berlinale-awarded Victoria, while Yorgos Zois’ Interruption leads the Greeks in the International Competition 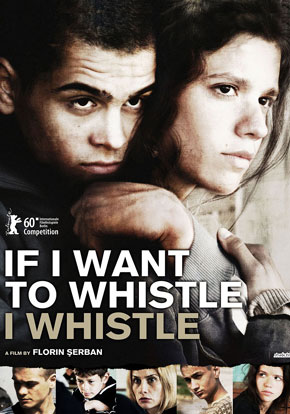