03/03/2010 - Nicolas Winding Refn’s Valhalla Rising tells a mythical story of a mute warrior and his instinctive search for spiritual home, wherever that may be

Although Valhalla Rising was shot in Scotland, it gives no specific time or place for the story. However, it’s obviously the early Middle Ages, somewhere in northern Europe. One Eye (Mads Mikkelsen), a mute warrior of amazing strength and skill, is held captive by a tribal band that uses him as a fighting machine. When he’s not fighting, he is held in a cage and fed by a boy (Maarten Stevenson) who will turn out to be his voice.

After being sold to another tribal lord, he quickly escapes and soon meets a band of Christian Vikings on their way to liberate Jerusalem. One Eye joins them for apparently unclear reasons and they quickly realise they can use such a warrior. They travel by boat into a fog that takes them to North America, as presented by details such as Native American feathers and burial grounds.

Once there, primordial nature takes over and the band is killed one by one – except for One Eye and the boy, who survive – by an unseen enemy.

Valhalla Rising is divided into five chapters and the first half shows bone-crunching, blood-drenched violence in the mud of the Scottish highlands. This is vintage Refn, and fans of epic fantasies and sword and axe battles will be delighted. Some of the fight scenes are exquisitely innovative and thrilling, a quality in short supply these days.

One Eye’s empty socket and scarred and tattooed body are chilling and present a character apparently void of anything but the capability for devastating bodily harm. The Vikings are led by a zealot priest whose only interest is spreading Christianity by any means necessary.

However, once they enter the fog it becomes clear that One Eye is more than he appears to be. We see his visions, often coloured blood red, but they don’t show us anything concrete. Is he the Devil? Is he a spirit? Some may even claim he is an embodiment of a god. The boy says, "He comes from Hell in the north".

When they arrive in North America, the real reasons for the others’ travels become clearer, but One Eye still remains a mystery. As does his relationship to the boy, who is obviously much more than a means of communication with the cryptic warrior.

Who chose whom here? Did One Eye need the boy to display his emotions and ideas, as Mikkelsen plays with a straight, frowned, unemotional face to the very end of the film? Is the boy perhaps the one running the show and needed a weapon to achieve whichever purpose he might have had? In any case, their actions lead us to conclude that by arriving at his final destination, One Eye has returned to wherever he comes from – spiritually, not geographically.

The film offers no easy answers, and obviously never intended to. Refn turns to a new territory here, with a fantastically cinematic use of the Scottish hills as a background that can represent both a geographical region of northern Europe and mythical Nordic landscapes.

Droning heavy metal music and colour filters show Refn’s developing affinity for combining art and violence, also prominent in Bronson. This is a mix of fantasy, mythology, spirituality and physical power that many will not find easy to watch, but will definitely be challenged to think about.

The rise and death of mythology

Nicolas Winding Refn speaks about the relationship between action and spirituality, religion and mythology in Valhalla Rising

Nicolas Winding Refn’s Valhalla Rising tells a mythical story of a mute warrior and his instinctive search for spiritual home, wherever that may be 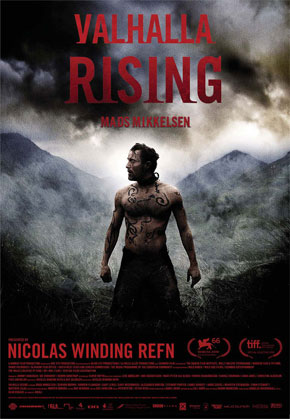