13/03/2010 - Hans Petter Moland’s gangster comedy, enhanced by great empathy for his protagonist (Stellan Skarsgård) and deep humanity, scored at the 60th Berlinale, where it was unveiled in competition

Six years after his dense human drama The Beautiful Country, shot in English in Asia and the US, Hans Petter Moland was back in competition at the latest Berlinale with A Somewhat Gentle Man [+see also:
trailer
interview: Hans Petter Moland
film profile]. Of a drastically different genre and setting, this light comedy that uses the language of Ibsen is set in an industrial neighbourhood of Oslo.

The director’s first venture into comedy, served by an all Scandinavian cast and crew, hit the right chord at the Berlinale, where its official competition screening was welcomed to roars of laughter. The film received the Berliner Morgenpost Audience Award and was sold to several territories including Benelux (Wild Bunch), Poland (Vivarto) and CIS/Baltics (Maywin Media).

A Somewhat Gentle Man is distinctively anchored in the Scandinavian tradition of absurd tragicomedy and also makes clear references to the Coen brothers’ noir gangster movies such as Fargo. Stellan Skarsgård – who gave some of his finest performances in Moland’s previous films, Zero Kelvin and Aberdeen – plays 58 year-old Ulrik, who is released from jail after serving a 12-year sentence.

No one is there to welcome him in the outside world, so he heads off to the nearby café where his gangster friends finally show up. The first lines between Ulrik, his old boss Rune Jensen (Bjorn Floberg) and his lowlife assistant Rolf, and a misunderstanding about his release date, immediately set the tone for the offbeat comedy.

Ulrik gradually settles in his new life. He camps out in the basement of Rune’s repulsive elder sister and finds work as a mechanic. The garage owner (Bjorn Sundquist) – another great comical character with verbal diarrhoea – gets to like and trust Ulrik, and so do we. Despite his solemn looks and few words, he is a likable person, ready to give a helping hand. He can fix most things: cars as well as his landlady, former wife and work colleague’s sudden sexual needs.

He even gives it a go at fixing an unfinished business with a guy accused by Rune of being the snitch that sent him to prison. All Ulrik really cares about is re-connecting with his son, now an adult with a “proper” life and pregnant wife. But life is not so simple, especially for an aging man with a history as a murderer. After a series of events that temporarily taint his efforts to get back on the right track and our belief in his “gentleness”, Ulrik ultimately gets what he wants.

From a script written by the expert hands of Danish scriptwriter Kim Fupz Aakeson, Moland has brought to the screen a colourful, charming and off the wall gallery of characters, all perfectly acted by some of Scandinavia’s greatest talents. Skarsgård’s somewhat subdued performance is counterbalanced by many of the secondary characters’ extravagant behaviour that sustains the comical elements throughout the movie.

The scenes between Skarsgård and Jorunn Kjellsby (his landlady) – when he kindly gives her a quick sexual fix while chewing his dinner, or when they watch Polish television – are particularly well scripted, as is his gradual romance with the garage secretary played by Norwegian singer Jannike Kruse in her first major film role.

Moland’s obvious empathy for his characters transpires in the care he has put in detailing their lows and highs, likes and aversions. The film loses its tempo in the middle, when Ulrik’s luck temporarily fades away, but accelerates again for the last part, where in a Coen-esque scene the “gentle” man uses his gun to turn the page on his past and start afresh (so we think). The mix of pop, jazz and mambo music offers the right swingy beat for the black comedy. North [+see also:
film review
trailer
interview: Rune Denstad Langlo
film profile] DoP Phillip Øgaard shot the entire film in cold colours, using low skies and artificial light to enhance Ulrik’s uncertain and greyish life. He opts for a natural bright light only in the last scene, to stress the beginning of a new life for our man of honour.

more about: A Somewhat Gentle Man

“It’s pretty hard to age with any sort of dignity”

EFM: Even before appearing at the festival, In Order of Disappearance sells to 30 countries

The list of contenders for the 2014 Golden Bears is complete 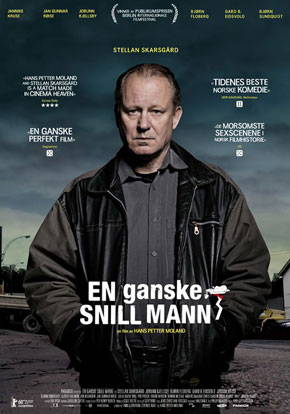