“I don’t belong to this place”, says Frederick, returning to visit (though we only see him enter, in a long shot of commendable dryness) the concentration camp in which he had been imprisoned. For 40 years, this brusque man who we see walking through his forest and in the morning waking his guests by blasting Wagner (“It’s not music to listen to softly”) has hidden his past as a gay prisoner from everyone.

The only ones who knew were his wife and eldest son, who humiliated his father upon finding out and whose funeral, in the beginning of Family Tree [+see also:
trailer
film profile], has just passed, unattended by the head of the family. Frederick’s inexplicable absence sets off an emotional storm that can only be abated by confessing that secret, kept hidden for too long.

Memory – individual, familial and social – is thus seen as the only instrument capable of reconciliation. After the TV-like Born in 68 [+see also:
trailer
film profile], Olivier Ducastel and Jacques Martineau return to the Turin GLBT Film Festival with a new appeal for keeping history alive.

“Telling the story of this gay man who comes out after an entire lifetime is a way to recover something of our community’s history,” said the duo, who tackled a long-forgotten chapter of French history only recently recognized by authorities, yet still surrounded by much reserve. “It’s absurd that no one in our country ever talks about the deportations of gays during WWII. In Germany they’ve been talking about it for at least 20 years”.

Starring actors with a great sensibility (above all patriarchGuy Marchand and his wife Françoise Fabian, who here finally find the leading roles denied them for too long), the film foregoes the typical tricks and shortcuts of the genre (there are no flashbacks) and finds a classic rhythm that skillfully balances out the warm domestic interiors and outdoor shots (thanks to the beautiful photography of Mathieu Poirot Delpech); emotions and lucidity; dialogue and silence. Through to the final, sweet epilogue with young couple Sabrina Seyvecou and Yannick Renier in the shadow of a family tree they promise never to cut down.

The Panorama section of the Berlin International Film Festival will feature Road to Istanbul and Paris 05:59

Directed by Christophe Ali and Nicolas Bonilauri, the feature, produced by Cinema Defacto and Tarantula, will be sold internationally by Bac Films

On September 20, shooting will start on Brice Cauvin’s second feature, L'Art de la Fugue, an adaptation of US writer Stephen McCauley’s novel “The Easy Way Out”. The director attracted attention...

After Work Hard, Play Hard (in competition at Locarno in 2003, nominated for the Best Debut Film Cesar 2005) and The Feelings Factory (selected in the Berlinale Panorama 2008), Jean-Marc Moutout...

With one title selected in competition and three in the Directors’ Fortnight, Paris-based international seller Films Distribution will be looking forward to the 63rd Cannes Film Festival (May...

“I don’t belong to this place”, says Frederick, returning to visit (though we only see him enter, in a long shot of commendable dryness) the concentration camp in which he had been imprisoned. For...

Turin capital of gay cinema, but Italy certainly not 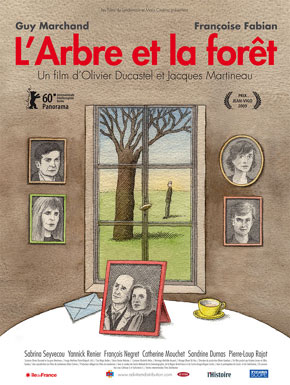