06/05/2010 - Swiss director Nicolas Wadimoff’s camera explores war-torn Gaza and brings to life its inhabitants who, between pain and despair, find the energy to continue living

"I didn’t know there was a ghost town here." A kid, with eyes wide open and arms swinging, tries to find the remains of the Gazan fairground attractions among the ruins. But it’s no use, the cheap thrills have been replaced by the desolate aftermath of yesterday’s bombing.

With this terrifying metaphor opens Aisheen (Still Alive in Gaza) [+see also:
trailer
interview: Nicolas Wadimoff
film profile], which won honours at the Berlin Film Festival and Nyon’s Visions du Réel Festival. With these successes under its belt, this co-production between Jazeera Children’s Channel (Qatar) and Swiss company Akka Films will be released in Switzerland on May 12 and in France on May 26.

Without pathos, the film shows the lives of inhabitants of the Gaza Strip during and after the Israeli bombings of December 2008-January 2009. Several families directly affected by the war talk about their physical and psychological wounds.

In a field, a man picks up bits of wood, the last remains of his centuries-old olive trees, and weeps for his land. A child describes the attack in which he was injured and saw his brother die. A young girl recalls her mother’s last smile left suspended on her lips while a bomb hit their house.

However, where the film could sink into despair and fear, it is firmly on the side of life. Far removed from TV clichés, Wadimoff has filmed the war from a different angle. There are no butchered bodies, no images thrown off-centre by the blast of explosions.

On the contrary, the sun shines in Gaza, children play and marvel at a whale carcass. We find ourselves amazed at this. Aisheen doesn’t just show us that people die in Gaza but, above all, that life goes on, even there. Images pass by of places one thinks couldn’t possibly exist alongside war: an amusement park, a zoo (whose most aggressive monkey is called Sharon), schools that echo with the sound of children’s games, sometimes drowned out by the rumble of the bombs.

These games – a real collective catharsis – incorporate the war in their rules. The clown sits on some balloons and jumps with a start, fearing an explosion, while the children play the victims. A teacher asks his pupils to go and comfort a friend playing the role of a man who has lost his whole family. This gesture of tenderness acted out by the children symbolises both a poignant rehearsal of future suffering and therapy for past horrors.

A long way from the dark and jerky images of TV news reports, the peacefulness and soft light that floods certain shots embody the victory of life over barbarity. Just like the rap group who speak of their anguish, dreams and rebellion without hatred. Or like the men who drop a saucepan and dismiss the war with humour: “The chicken has been bombed. They must have thought it was stuffed with explosives!” While others maintain that, deprived of education, youngsters will become mujahideens and die as "martyrs", a child whispers lucidly: "Who isn’t afraid of dying?" But for the time being, Gaza is alive.

Long-time director and producer at Akka Films, Nicolas Wadimoff has made several films in Palestine

Swiss director Nicolas Wadimoff’s camera explores war-torn Gaza and brings to life its inhabitants who, between pain and despair, find the energy to continue living

Spartans, a subtle chiaroscuro play on violence and sophistication

The latest movie by Swiss Nicolas Wadimoff brings us up against an atypical, awkward and, at the same time, magnetic character

On Saturday, March 12 in Lucerne, the winners of the 2011 Quartz Swiss Film Awards will be announced. For the moment, only the Honorary Award laureate has been revealed: producer Marcel Hoehn (T&C...

May, June and July are prosperous months for Swiss cinema as nine films bearing Switzerland’s stamp are being released in France and Germany. Jean-Luc Godard’s Film Socialism (Vega Film) was...

With major names in documentary film and distinguished guests, the 16th Visions du Réel Festival (April 15-21), the “Croisette of documentaries”, opens today. This edition will be marked by the... 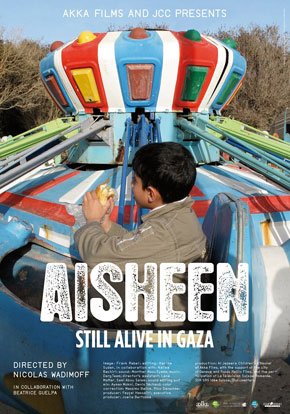