The director’s second feature, presented out of competition, cleverly combines contemporary history, the themes of family, memory, integration and political conscience with the story of a love-at-first-sight romance. It is aesthetically captivating and carried by the pace of the narrative and quality performances by its lead actors: Sara Forestier and Jacques Gamblin.

Based on the classic device of two diametrically opposed characters, The Names of Love orchestrates an encounter between the young and impassioned Bahia Benmahmoud (daughter of a marriage between a 1970s Parisian hippy and an Algerian immigrant worker), and unassuming 40-something Arthur Martin, a researcher into epidemic animal diseases and son of a typically French family where the unspoken reigns ("my parents are champions in all categories of taboo").

She is totally uninhibited and sleeps with her many Fascist political enemies in an effort to convert them, whereas he likes tranquillity, the principle of caution and the Socialists. But each is hiding a secret: she was sexually molested as a child, while his Jewish grand-parents were deported.

Around this plot, Leclerc (who co-wrote the screenplay with Baya Kasmi) weaves a highly entertaining film which doesn’t lack sensitivity. Using voice-offs, characters talking directly to the camera, flashbacks and archive footage of the presidential elections, he manages to infuse his film with invigorating humour (notably a very funny cameo appearance by former Prime Minister Lionel Jospin) based on the simple elements of life (loving, trying to find oneself, losing one’s way, finding oneself again....).

This is an opportunity to show, with a smile, that appearances and differences are sometimes deceptive ("You’re Jewish, I’m Arab and the cops killed our relatives. It’s one part of history making love with another") and the future belongs to what biologists call “hybrid vitality". But, of course, not everything is that simple and Bahia (Forestier on sparkling form) and Arthur (an outstanding Gamblin) will have to overcome many misunderstandings (giving rise to light-hearted comic moments) in their quest for happiness free from prejudice.

Produced by Delante Films and Karé Productions, The Names of Love received co-production support from TF1 International (who are also handling international sales), pre-acquisitions from Canal + and TPS and backing from the Ile-de-France region.

more about: The Names of Love

The Vanished President is now in post-production 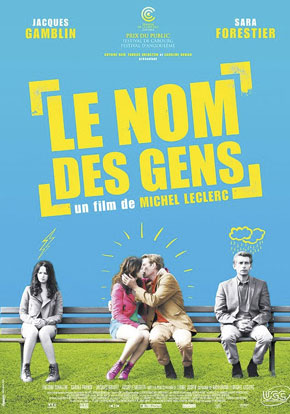