Dear Prudence is a classic auteur film and typically French in style, an intimist story that lets the camera capture all the emotions of its characters. These emotions are many and complex, although the director has chosen to leave aside that most predictable of themes in a film centring on teenagers: generational conflict.

With almost no adults around her (her mother died a few weeks ago and her father is on a business trip), Prudence starts to frequent the underworld of illegal motorcycle race tracks in Rungis. The excitement of this atmosphere is a sort of compensation for the emptiness she feels after her apparent inability to mourn for the death of her mother.

The illegal race tracks also bring new friends, experiences and fears. Zlotowski could have chosen the melodramatic genre for filming this story but her screenplay prefers to put the emphasis on subtlety and restraint. Léa Seydoux (The Beautiful Person [+see also:
trailer
film profile]), who plays imprudent Prudence, pulls off the best performance of her young career so far: fragile and strong at the same time, moody and helpless in the chaos of her emotions.

"If you get everything served, then existence is boring"

BERLINALE 2021: The French actor, writer and director tells us about the biggest challenges in his career, and what he would like to do with it in the future

The French film centre will also lend its support to films by Rebecca Zlotowski, Gaspar Noé and Hugo P Thomas, as well as animated films by Michel Hazanavicus and Fernando Trueba and Javier Mariscal

A co-production uniting France, Lebanon and Canada, this film by Joana Hadjithomas and Khalil Joreige dazzles up front in the sales agent’s top-notch line-up

The latest edition of the festival will unfold in Brussels between 11 – 15 December, boasting its fair share of premieres and high calibre guests

"A story that isn’t afraid of being a bit enigmatic"

French director Rebecca Zlotowski deciphers Planetarium, a film that plumbs the depths of and trouble with suggestion

Planetarium: The veil of appearances

VENICE 2016: Rebecca Zlotowski brings us a film which is captivating, cryptic and a bit of a crossbreed under its novelistic surface, starring Natalie Portman, Emmanuel Salinger and Lily Rose Depp

The filmmaker’s debut feature hones in on the beginnings of women’s football, with the Les Films Velvet production set to star Vanessa Guide and Max Boublil 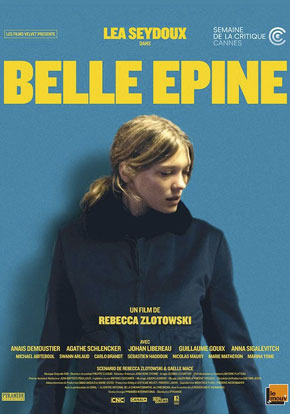