Exploitation of illegal immigrants and broken family life are explored through the experiences of a man who has a gift for telepathic communication with ghosts and discovers he has terminal cancer: this is the plot of Mexican director Alejandro González Iñárritu’s Spanish co-production Biutiful [+see also:
trailer
film profile], unveiled today in competition at the 63rd Cannes Film Festival.

Set in a grey Barcelona in an aggressively noisy atmosphere, the film is literally carried by Javier Bardem who lives up to his immense talent. But the burden of mortality hanging over the protagonist and the complicated mix of intimate portrait, documentary-style exploration of social issues and thriller-like twists and turns, make Biutiful an uneven work haunted by the shadow of screenwriter Guillermo Arriaga, who for the first time has not collaborated on a film by Iñárritu.

Opening with a convincing scene that creates a real sense of mystery, the film traces the difficult journey of Uxbal, a delinquent who lives off the exploitation of immigrants from Africa (street peddling of counterfeit goods) and China (clandestine workshops and building site work on the black). Acting as an intermediary, Uxbal bribes the police and, along with his brother, finds opportunities for the small-time mafiosi who control the illegal immigrants crammed into basements and warehouses.

On occasions, in funeral parlours, he also exercises a totally irrational power: freeing the dead from the anguish that torments them. Unhappily struggling along in this dark atmosphere, he brings up his two young children alone, occasionally bumping into his manic-depressive wife (Maricel Alvarez). They both still love each other, but have been through too many bad times to manage to start over again.

Fate is unrelenting with Uxbal: prostate cancer leaves him with only a few months to live, his non-safety standard gas heaters kill a room full of illegal immigrants, and his gift for telepathy only brings him further sorrow and suffering. In despair and keeping his impending death a secret, he tries to survive for his children’s sake and settle his moral and romantic debts, but everything becomes increasingly difficult, like the mark of divine punishment.

Produced by Mexico’s Menage Atroz, Biutiful was co-produced by Spanish companies Mod Producciones and Ikiru Film with investment from Television Espanola and Televisio de Catalunya, and backing from the ICAA.

Review: I Can Quit Whenever I Want

Cannes’ jury to be chaired by Alejandro González Iñárritu

CineEurope 2015 gets going in Barcelona

Promoción fantasma, or the proof that good teen comedies exist

From Berlinale to local screens: Totally True Love, The Mountain 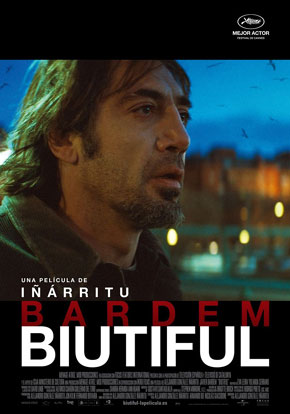