Games of love and art in Certified Copy

The name of Roberto Rossellini had for some time hovered over Abbas Kiarostami’s films, but this time, there is a real connection in the Iranian director’s "Journey to Italy": Certified Copy [+see also:
trailer
film profile], a multi-layered European production presented in competition at the 63rd Cannes Film Festival (May 12-23).

Entirely centred on the couple played by an outstanding Juliette Binoche and the rather impassive baritone-voiced Brit actor William Shimell, the first feature shot by the Iranian master outside his country is a stimulating romantic confrontation exploring the duality of behaviour and expressions. But Certified Copy is also an in-depth analysis in playful tone of the possible definitions of art, all of it enveloped in a directorial style that is as sophisticated as it is stark, reflecting all the warm and timeless beauty of Tuscany.

"There is nothing less straightforward than being straightforward". True to this opinion uttered by one of the film’s protagonists, Kiarostami, a foreigner immersed in the land of the Renaissance, advances in darkness into a story playing on the countless potential variations on the idea that an object or a subject is always better seen and understood when it is illuminated from two angles.

On the first level of the plot, a couple (a British writer who has come to give a conference and a French gallery owner living in Italy) talk constantly during a visit lasting a few hours in the village of Lucignano which has a reputation for bringing luck to married couples. At first, the man and woman are not supposed to know each other and seem instead to be in the initial stages of a romantic encounter. As a game, they then adopt the position of a married couple, before viewers realise that they really are married and have been for 15 years.

But the doubt persists, leading to a refreshing mirror game between past and present, memory and forgetting, sweetness and bitterness, emotion and coldness, distance and proximity, laughter and crying. Amorous passion and its relationship with time are explored in the constant shifting of power between the two characters, as they move around a village that is also well-known for a painting nicknamed "the original copy".

For beyond the constant argument pitting man against woman, a duel revived by the grace of an inspired Binoche and with a few rare appearances by other characters at the heart of the story, Certified Copy weaves a complex web around the question of art and life, true and false, the object and gaze. Pulling off the astonishing gamble of tackling very abstract concepts whilst filtering them through a conversation that immediately re-assimilates them into everyday life ("Well done for that great wisdom! Come back down to earth a bit! (…) It’s laughter that matters, not morality"), Kiarostami has left his unmistakable stamp on this highly original cinematic journey to Italy.

Juliette Binoche to chair the jury of the 69th Berlinale

Binoche and Ramírez to star in A Monkey on My Shoulder

Binoche forgets 12 years of her life in Another Woman's Life

European Distributors Up Next! 2010 - Croatia 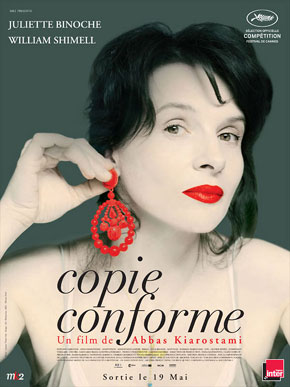