Hastily labelled “the next Lars von Trier” after the Golden Camera and the Prix Regards Jeune for best first feature went to his Reconstruction at the 2003 Cannes Film Festival, Danish filmmaker Christoffer Boe decidedly underwhelmed critics and audiences with his next efforts Allegro [+see also:
trailer
film profile] and Offscreen [+see also:
trailer
film profile], compared to the little gem he made 7 years ago.

Perhaps this explains why the lead character of Everything Will Be Fine [+see also:
trailer
film profile], selected for the Directors’ Fortnight at the Cannes Film Festival, is rather ironically a director and screenwriter obsessed with his own oeuvre and unable to finish his script for a war film. The 36-year-old Boe relishes probing an individual’s mental processes and exploring the inner workings of the human soul; and his new film, starting with the title itself, seems to play on Boe’s status as a promising young talent who has yet to prove his maturity as a filmmaker to the world.

Jens Albinus plays the director, Falk, who is waiting to adopt a foreign child with his wife Helena (Marijiana Jancovic) and is getting ready to shoot his next film. But he keeps on running after he runs over a young Arab (Igor Radosavljevic) who entrusts him with a bag containing photographs and a diary. The young man is an interpreter for the Danish army just back from Camp Viking in Iraq, where he witnessed prisoners being tortured. Falk now possesses proof of his own government’s wartime atrocities and is soon prey to a paranoia which fast leads him to think he’s being watched and threatened by the secret service.

After starting off as a political thriller, Everything Will Be Fine morphs into a melodrama, bending genres with the flashbacks and flash-forwards that are Boe’s trademark. What we get is an “indecision” that is orchestrated as if the auteur behind the camera were the protagonist of the film himself. The colour saturation, another distinctive feature of this director’s style, brilliantly conveys the film’s paranoid atmosphere.

Boe once again devotes special attention to the set design of the indoor scenes (a series of designer homes and postmodern hotel rooms). In fact, the film opens with and ends on a pan shot of architecture models that sum up the film’s settings and the main characters; for certain shots of the real scenes he even uses the photographic technique called tilt-shaft, or miniature faking, in order to suggest that nothing is as it seems.

more about: Everything Will Be Fine

A tantalising programme is on the cards for the ninth edition of the festival, which will unspool in Lille for the first time from 27 April-5 May

CANNES 2017: Christoffer Boe will direct Zentropa’s fourth instalment in the thriller series, which has so far sold 2.2 million tickets in Denmark

Fashion designer Agnès Troublé, known worldwide as Agnès b., is directing her first feature film and producing it via Love Streams.

Setting up a love story that turns creepy before it goes sour, Christoffer Boe takes a turn for the graphic as he mixes romance and melodrama with straightforward blood and gore in Beast, his...

The Danish director talks about his hitchcockian film Everything Will Be Fine, selected in the Directors' Fortnight section in Cannes.

The Danish Film Academy has announced this year’s local films that will run for the Robert Awards. Thomas Vinterberg’s Submarino is the favourite with 19 nominations, followed by Nikolaj Arcel’s...

“The European films are rebellious and inventive”

Kicking off today is the 26th Warsaw Film Festival, where 15 features will vie for one of the three main gongs (Grand Prize, Best Director and Special Jury Prize) to be awarded at its close. The...

Hastily labelled “the next Lars von Trier” after the Golden Camera and the Prix Regards Jeune for best first feature went to his Reconstruction at the 2003 Cannes Film Festival, Danish filmmaker... 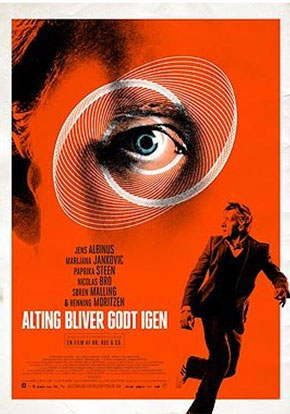