Cul-de-sac of death in My Joy

Ultra-nihilistic and offering a terrifying image of small-town Russia, the film reveals an original director with strong potential, who is particularly bold (far too bold, some will say) in his screenwriting approach and has outstanding visual talent that draws on the best of his experience as a documentary filmmaker.

Structured around a series of different stories (a lost lorry driver who comes across a trio of thieves, a military serviceman robbed by a policeman, a child who witnesses his father’s murder, a strange household who live by their wits, some soldiers who try to bring someone’s body back to the family, power abuses by the road police), My Joy unfolds over several temporal dimensions with two flashbacks looking back to the end of the Second World War and leaps in time that are difficult to define in the contemporary era. There emerges from this a surprising maelstrom that is vaguely clarified by the connections and recurrent appearances of characters and the parallels between several stories.

This canvas with multiple branches perfectly illustrates the social disintegration at the heart of the film (homeless people in the countryside, gangs in villages, economic underclass): disturbing characters appear suddenly, violence breaks out without warning, the loss of reference points opens the door to the law of weapons and exploitation of the slightest ounce of power.

This society of death whose extreme portrait is magnified by extraordinarily rich camerawork (by DoP Oleg Mutu – 4 Months, 3 Weeks and 2 Days [+see also:
film review
trailer
interview: Cristian Mungiu
interview: Oleg Mutu
film profile]) and incredible realism (through a cast combining professional and non-professional actors) intrigued and irritated the press in equal measure. Its cleverly maintained confusion and extravagant ending unfortunately detracts a little from this German/Ukrainian/Dutch co-production which is nonetheless one of the most innovative of the Cannes competition so far.

more about: My Joy

CANNES 2017: Sergei Loznitsa is back with a piece on totalitarianism and the Russian spirit, mixing abundance and austerity, which could have been exceptional

The movie will bring together Robert Pattinson, Patricia Arquette and Mia Goth in the cast; Arte will also co-produce films by Sergei Loznitsa, Yann Gonzalez and Grégoire Leprince-Ringuet

Joachim Trier’s project will be coproduced by the cinema branch of the Franco-German channel, as is the case for the next films by Loznitsa, Hers and Pariser

Latvia comes out from In The Fog

In The Fog looks set to be a huge Cannes success. As Cineuropa learns, it’s also a huge success for Latvia

A Way of the Cross In the Fog

Sergei Loznitsa has made a tragic masterly work about a moral dilemma in the middle of Nazi-occupied Belorussia.

German hopes on the Croisette

With five co-productions in competition, the German industry is already guaranteed a handsome representation in Cannes

“Film professionals need to be generous” 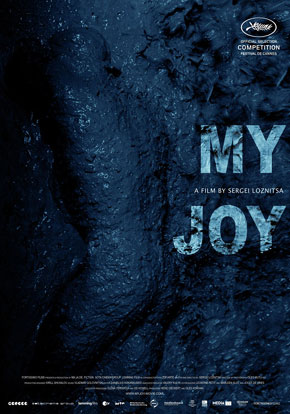