CANNES 2010 Out of Competition / France

There was a marathon 5hr19min out-of-competition screening today at the 63rd Cannes Film Festival for Olivier Assayas’s Carlos [+see also:
trailer
film profile], which attracted a great deal of press attention even before arriving on the Croisette due to the production’s TV drama format. But the director pulls off the feat of bringing a cinematic touch to a thriller spanning 20 years and retracing the incandescent life of a revolutionary, terrorist and mercenary who traverses the mine-fields of recent history.

Of unquestionable formal quality, Carlos grabs hold of viewers and takes them on an energetic journey in a world of secrets and violence, on the trail of a rather paradoxical killer. A mix of good education and attraction to crime, collective revolutionary ideals and venal individualistic opportunism, arrogance and realism, fascination with fame and a taste for discreet manoeuvring, the psychology of Assayas’s Carlos (an outstanding Edgar Ramirez) becomes clearer over the course of the many events that punctuate his career.

"You haven’t heard the last of me. Now I’m called Carlos". In London, in 1974, a Venezuelan man named Ilich Ramirez Sanchez reveals his ambitions for glory through internationalist direct action to a young, far-left-wing South American woman. Already a member of the PFLP (Popular Front for the Liberation of Palestine), he has just attempted to assassinate the head of Mark & Spencer.

Climbing the ranks of his organisation based in Beirut and Aden, Carlos coordinates a hostage-taking by the Japanese Red Army in the Hague, provides weapons to the German Revolutionary Cells before escaping arrest in Paris by killing three police officers. This feat of arms earns him the right to oversee the dramatic hostage-taking of OPEC ministers in Vienna at the end of December 1975.

Stuck in Algiers in the plane used to flee Vienna, he then chooses money over orders and the revolutionary cause. He is expelled from the PFLP. His career as a media-friendly mercenary then drifts from East Berlin to Syria, passing through Baghdad, Budapest, Bucharest and Libya before ending in Sudan with his arrest and extradition to prison in France.

This turbulent life, which crosses the path of many historical figures, is cleverly developed by Assayas, who alternates pure action to the sound of violent rock music, archive footage, moments of focus on the secondary characters (the entire spectrum of the far-left at the time) and an in-depth look at the stakes of terrorism. This vast work, which doesn’t always keep up the same pace and often neglects to go into details, is nonetheless a spectacular and compelling film, worthy of the legend that Carlos strove to create.

Kristen Stewart, Lars Eidinger, Nora von Waldstätten and Anders Danielsen Lie are among the cast of this CG Cinéma production that will be sold by MK2 at the AFM

25,000 went to the cinema under the Midnight Sun 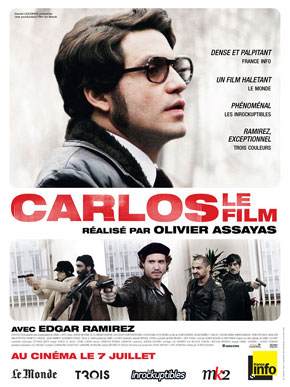