Germano shines in Luchetti’s Our Life

There’s a moment in Daniele Luchetti’s Our Life [+see also:
trailer
making of
film profile], in competition at Cannes, in which the young Romanian Andrei tells main character Claudio: "Things cannot be fixed with money.” Luchetti said that the intent of the screenwriters (himself along with Sandro Petraglia and Stefano Rulli, with whom he had worked on My Brother Is an Only Child [+see also:
film review
trailer
interview: Daniele Luchetti
interview: Riccardo Tozzi
film profile], selected in Un Certain Regard in 2007) was to avoid political or social messages.

It is difficult, however, when watching the film, to not think of the culture in which appearance is everything; of the mad dash for material well-being at any price that people have picked up like a fever. It is even more difficult – given that the film is about illegal construction, illegal subcontracting, the mass exploitation of illegal immigrant workers and buildings built with shoddy material – not to think of the daily news, of the buildings that come crumbling down at the first tremors of an earthquake.

Thirty-year-old Claudio (Elio Germano, visceral as always) lives on the outskirts of Rome, where TV and pop music are the only forms of culture available. In fact, Luchetti wrote this film from a documentary he made on families such as these. Claudio doesn’t have a steady job, but gets by working in the underbelly of construction, on those buildings that make us shake our heads when we drive in and out of many European cities.

Claudio loves his wife Elena (Isabella Ragonese), who is about to give birth to their third child. When she dies in childbirth, he experiences the tragedy as an injustice and decides to face life with cynicism. The opportunity to do so comes when he discovers the accident death of a Romanian guard at his construction site, which has been covered up.

Rather than stop work and send home 50 workers (almost all illegal immigrants), he blackmails his boss (Giorgio Colangeli) into subcontracting him another building. To start the job, he needs €50,000 cash, which he borrows from his pusher friend (Luca Zingaretti), who lives with a former Senegalese prostitute (Awa Ly) that takes care of Claudio’s newborn.

Guilt drives Claudio to help the companion (Alina Madalina Berzunteanu of Cristi Puiu’s The Death of Mr Lazarescu [+see also:
trailer
film profile]) of the dead Romanian, and gives her son Andrei a job, even letting him stay at his house. Claudio isn’t a real tough guy, a criminal. His brother, a somewhat naïve security guard (Raoul Bova), and sister (Stefania Montorsi), currently on the dole, are adorable and love their "black sheep" of the family, who has been left a widower with three young boys to take care of.

Luchetti shoots in a documentary-like style, using a hand-held camera and many close-ups, natural light (caught by DoP Claudio Collepiccolo) and a number of real construction workers. In doing so, he wants to present a portrait other than the classic one we have of the working class, and above tell a small family drama.

more about: Our Life

The Roman director’s film hitting 250 movie theatres today, distributed by 01, tells the story of his family from the 1970s: an artistic avant-garde father and a mother looking for liberation

Call Me Francesco, the story behind the People’s Pope 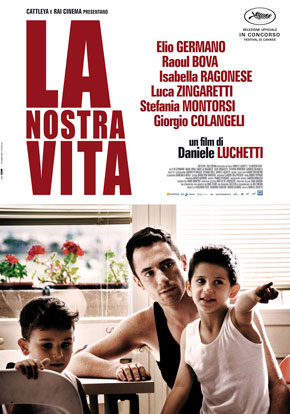