26/05/2010 - An unusual Italian film, winner of the Europa Cinemas Label in the Directors' Fortnight at the Cannes Film Festival 2010

There is a cinematic territory where the documentary borders on fiction and poetry seeps into reality, a land that certain filmmakers stake out to “rethink filmmaking and push the medium’s envelope,” as Philippe Bober from the international film sales company Coproduction Office explained in an interview with Cineuropa, musing on the films he likes best. The lineup of the Coproduction Office features The Four Times [+see also:
trailer
interview: Michelangelo Frammartino
interview: Savina Neirotti
film profile] by Italian director Michelangelo Frammartino, which made the cut for The Directors’ Fortnight. The Italian pic was defined “a sumptuous film, verging on the documentary, and a poetric journey that reverberates with echoes of the cinema of Ermanno Olmi" by Frédéric Boyer, new Artistic Director of the Directors’ Fortnight, in another interview with Cineuropa.

As a matter of fact, the film produced by Vivo Film, a 2007 selection for the Cannes Atelier, also reflects the influence of another master of the Italian documentary, Vittorio De Seta. Back in 1959 De Seta made a short called The Forgotten, about the spring tree festival that has taken place in a village in Calabria, Alessandria del Carretto, for as long as anyone can remember.

And it is this ancient ritual that the Milan-born Frammartino, whose parents hailed from Calabria, went back to his roots to film, and turned it into one of the four stories that make up his latest effort.

In what amounts to an ideal sequel to his previous film The Gift, set in Calabria, the director filmed first man, then animal life, then vegetation, and then the dust, linking the stories in a circular narrative. An elderly goatherd swallows the dust he has collected from the floor of a church to cure his cough; dying, he leave his flock as a baby goat is born. The goat grows up and leaves the shelter of the goat pen for the pastures beyond. A giant fir tree, which has always towered over the village square like the Cockaigne pole of Italian tradition, is cut down by the charcoal burners and reduced to ashes. “With my storytelling, I wanted to restore dignity to the things that usually stay in the background,” Frammartino said.

A geometry that would do Pythagoras proud, in the service here of fixed shots, off-screen sound, and slow camera movements (one tracking shot in particular, starring a dog, is truly a must-see): all tributes of a sort to Frammartino’s role models – he first studied at the Civica Scuola di Cinema in Milan, then gained experience with the experimental video installations created by Video Azzurro – among his muses, Abbas Kiarostami, Andrei Tarkovsky, Tsai Ming-liang, and Béla Tarr. Nevertheless, he admits that "Calabria has heavily influenced me as a filmmaker: specifically, its concept of space. It’s an aporetic place, where the dividing line between inside and outside is blurred. And this is what drives my shots".

An unusual Italian film, winner of the Europa Cinemas Label in the Directors' Fortnight at the Cannes Film Festival 2010

“A political film on the relationship between man and nature”

The new feature from the director of Le quattro volte is now filming in Pollino National Park. A co-production between Italy, France and Germany, with Renato Berta as director of photography

The Italian Ministry of Culture supports new films by Sorrentino, Frammartino and Mollo

The 2013 TorinoFilmLab Meeting Event kicks off

The German selections of Locarno n°66 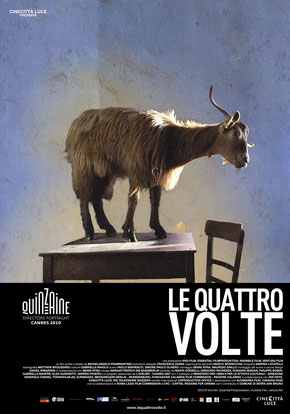