26/05/2010 - This splendid, poetic and highly moving animated film unveiled at Berlin is a journey in time, backstage at the music hall, to Scotland and into Jacques Tati’s work

Originality is a gift without physical boundaries or temporal limits for artists who manage to resist the flighty winds of fashion and prefer, instead of repeating themselves, to explore new territories linking them to a long tradition of excellence. This is how French director Sylvain Chomet, after the staggering success of Belleville Rendez-vous [+see also:
trailer
film profile] (unveiled at the Cannes Film Festival 2003 and nominated for an Oscar the following year) turned his back on "baroque" to move towards simple line drawings and abandoned black humour to immerse himself in nostalgic tenderness by adapting an unproduced screenplay by Jacques Tati.

The Illusionist [+see also:
trailer
interview: Sylvain Chomet
film profile] is the result of these bold choices which, in aesthetic terms, go against the 3D wave. Presented at the 2010 Berlinale, this UK/French co-production is a masterly work, demonstrating a highly personal vision and expertise, symbol of a subtle non-conformism that delves into the roots of the history of animated film. The irresistible charm of this journey into the past has won Chomet acclaim and offers viewers a reinvigorating return to simplicity on a human scale, far from the tumult of the super heroes, ogres, dragons and other creatures noisily overpopulating the imagination of modern-day children.

The transition from one era to another, the delicate shift from an ageing generation to young people eager for new things, and the lonely backstage world of show business are the main themes sketched out in the screenplay to The Illusionist. By taking possession of a story developed by a film personality with a style as unique as Tati’s, Chomet chose the perilous path of homage-making. The film’s main protagonist, a magician who is overwhelmed at the end of the 1950s by the emergence of rock music, is clearly Tati’s double, with his sartorial elegance, awkward stiff body, shilly-shallying behaviour, intense and discreet expressions and affectionate kindness.

However, The Illusionist avoids the pitfall of hagiography by infusing the story with a poetic dimension heightened by the absence of a well-defined language, as the characters talk a gibberish combination of French, English and Gaelic. This approach leaves the audience’s imagination free to decipher the various events and reinforces the evocative power of the graphics and music.

The film’s plot prefers the horizon of the journey and narrative simplicity over the artificial complexity of events. The magician, faced with growing failure and in search of contracts, leaves Paris for Edinburth, via London and an island of the Inner Hebrides. Trains speed across stunning landscapes, and the lights and architecture of the Scottish capital offer a myriad of visual possibilities used to wonderful effect by the director thanks to the richness of the hand-drawn animation.

This is the graphic backdrop to a moving encounter between the old artist and a naive young girl who follows him in his penniless bohemian life. A filial relationship slowly forms, fostered by the gifts from the illusionist who contributes to the girl’s discovery of the world and her transformation from child into woman, before he subtly disappears. Their two paths cross for a beautiful, fleeting but intense encounter like that between Chomet and Tati, between a French director and Scotland, and between a contemporary animation artist and the timelessness of creation.

more about: The Illusionist

"Taking Tati’s soul and putting it into animation"

This splendid, poetic and highly moving animated film unveiled at Berlin is a journey in time, backstage at the music hall, to Scotland and into Jacques Tati’s work

Bob Last resigns days before the festival, hunt on for successor

Amongst the new releases this week, the competitor from Cannes A Castle in Italy, the poetic Attila Marcel and the surprising Jasmine 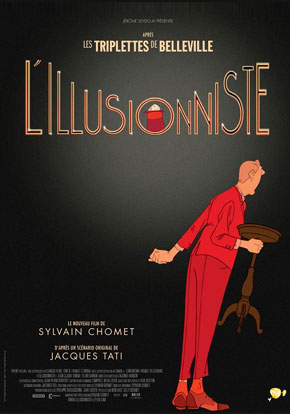