Hello! How Are You? has makings of domestic hit

Screening in Romanian Days, the traditional domestic showcase of the Transylvania International Film Festival in Cluj-Napoca (May 28-June 6), Hello! How Are You? [+see also:
trailer
interview: Alexandru Maftei
film profile] won't win any of the section's awards, but has a great chance of pleasing audiences domestically and abroad. Alexandru Maftei's second feature is a simple, funny and warm romantic comedy, a very rare genre film in the long row of internationally praised but bleak, minimalist dramas of recent Romanian cinema.

Written by Lia Bugnar, Hello, How Are You? tells the story of Gabriela (an excellent Dana Voicu) and Gabriel (Ionel Mihailescu), who have been married for two decades but feel there is no love and desire left in their relationship. Helped by co-workers, they discover Internet chat rooms and each falls in love, after long talks, with a complete stranger, unaware that they have actually found one another. Their incredulous (and very sexually active) son Vladimir witnesses the obvious changes in his parents' behaviour and tries to cope (and make the best of the situation).

Bugnar's witty dialogue is aided by good acting, while Maftei finds an ingenious and very simple solution to show the protagonists' long discussions online, without forcing viewers to interminably stare at a computer monitor. More comedy is brought by supporting characters, like Gabriela's co-worker Toni (Ana Popescu), a feisty young woman with extreme love affairs; and Gabriel's colleagues, who will make audiences feel that all the romance and sex lacking in Romanian cinema is concentrated in Hello! How Are You?. Adrian Păduraru, the star of Confession of Love (1985), perhaps the most popular Romanian love story ever, is instantly recognizable as one of Gabriela's clients.

Without simply being a virtual quid pro quo comedy, the film also light-heartedly analyses long-time couples' boredom and lack of communication and finds time for teenagers' obsession with sex and the generation gap, which could attract viewers of all ages and both sexes. The oppressive score and an unfortunate small budget, obvious in exterior sequences and the spartan production design, could pass unnoticed thanks to almost continuous laughs, convincing emotional scenes and an unpredictable ending.

more about: Hello! How Are You?

Alexandru Maftei is the man behind Hello, How are You?, Romania's first romantic comedy in years, also selected for the latest Karlovy Vary edition

George Bogdan Apetri's Outbound became the most nominated Romanian film of 2011 at the Gopos, the Romanian film industry awards, with 12 nominations, but Apetri's film did not beat the...

Numbers made public by local distributors show that Romanian films registered a decrease, as far as the total number of admissions was concerned, in 2011 compared to 2010. Florin Serban's If I...

Alexandru Maftei is behind Hello! How Are You?, the first Romanian romantic comedy in ages. Polish release March 2.

Ten European directors have been chosen to presenttheir latest films at the upcoming Karlovy Vary Film Festival (July 1-9) as part of the section Variety´s Ten Euro Directors to Watch. Formally...

Usually dominated by arthouse titles, Romanian screens will do some spring cleaning in March and April, when three domestic comedies will try to attract a public famously indifferent to the...

Released on September 17 by Voodoo Films on eight local screens, Tuesday, After Christmas is the first of more than 10 Romanian titles hitting domestic theatres over the next two months. Radu...

Hello! How Are You? has makings of domestic hit 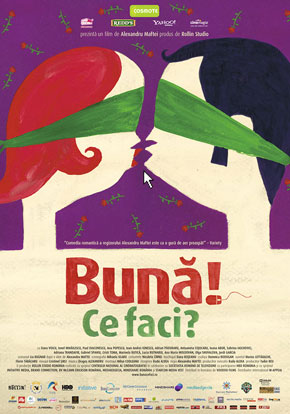