07/06/2010 - An extraordinarily forceful documentary about people at war showing the turbulent daily life of Danish soldiers in Afghanistan. Winner of the Cannes Critics' Week Grand Prize 2010

Set over six months in Afghanistan, the film plunges into the daily life of a troop of Danish soldiers in the international intervention force and reveals the complexity of this strange "war" thanks to a close immersion rarely achieved in a time of embedded journalists. Glued to its protagonists at unbelievable risk, the camera captures the raw violence, exposes the paradoxes of these men facing danger and questions, without taking sides, the stakes and limits of military presence in Afghanistan.

"Give them a taste of hell this morning! That’s what you’re there for". This harangue is directed at some Danish hussars posted for a few months to the Armadillo camp, in Helmand province. Beyond the 800m perimeter is the invisible enemy, the Taliban. The soldiers’ mission is to patrol the surrounding area in order to force their adversary into combat, whilst sweet-talking the local population.

"Expect some action! It will be interesting", an officer announces when welcoming the new recruits, some of whom have already been seen by viewers when saying their goodbyes in Denmark (extremely anxious families, a trashy blokes’ party with strippers, moving embraces at the airport). There is no shortage of action in Armadillo; indeed it sometimes resembles a narrative work, so extraordinary is the lack of distance between these soldiers and the camera studying their daily life, their moods and the gradual sliding towards the darker side of human beings.

The waiting wears down the nerves of the soldiers, who sometimes come under a barrage of bullets despite the amount of support technology (drones, video surveillance and listening devices), leaving some horribly wounded and in need of amputations. This waiting gradually causes violent feelings to emerge and widens the gulf with a local population caught between two firing lines ("You’ve got weapons and they’ve got weapons").

Armadillo could be a brilliant film manipulated as propaganda in favour of the presence of troops in Afghanistan, but Metz shatters this suspicion as the film progresses. A terrifying scene filmed at the military headquarters on a monitor screen shows three Afghans, merely suspected of being enemies, being wiped out by a shell. Then a patrol leads to intense fighting in which several Taliban members are killed and some injured ones are finished off.

Like a shadow in the chaos, the camera captures a brutality as extreme as the pervasive adrenaline and fear. These blunders are followed by an investigation, but solidarity reigns: nothing officially happened and the soldiers receive a medal. It’s time for them to return to their country, but many already want to get back to the front, leaving viewers to their own reflections at the end of a film that packs a punch and will stand out in Critics’ Week.

An extraordinarily forceful documentary about people at war showing the turbulent daily life of Danish soldiers in Afghanistan. Winner of the Cannes Critics' Week Grand Prize 2010

Interview with the director of the film awarded with the Grand Prize (SIC) in Cannes.

We chatted to Frank Hoeve, of the Netherlands’ BALDR Film, one of this year’s participants of the Producers on the Move initiative

Danish soldiers at war in Afghanistan wins US Emmy

While Danes rule EU they want to talk films too 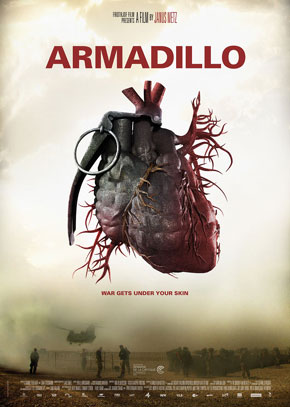