22/06/2010 - David Serrano returns to the genre that made him a screenwriting sensation, this time with pop songs, actors from both sides of the Atlantic and a man desired by three women

David Serrano is – along with Daniel Sánchez-Arévalo, Nacho Vigalondo and Borja Cobeaga – one of the most prominent young talents of the new Spanish cinema. His first outings as a screenwriter, with the musical The Other Side of the Bed and its sequel, The 2 Sides of the Bed [+see also:
film review
trailer
interview: Álvaro Curiel
interview: Emilio Martínez Lázaro
film profile], confirmed him this last decade as a rising star thanks to their good box office results, and revitalised and updated the Spanish musical comedy genre.

Encouraged by the first of these successes, Serrano made his directorial debut with Soccer Days, another comedy, albeit less glamorous than the previous ones. Made in 2003, it was produced by Telespán, the company with which he has worked from the start and will work with in the immediate future.

Centred on football and starring famous, local actors performing Peter Pan stunts to pull audiences, the film once again brought acclaim to the Madrid-born director who has no training in this field but is a big music enthusiast, as demonstrated by his films and the musicals he has staged in the theatres on Madrid’s Gran Vía (including one he is completing about singer-songwriter Joaquín Sabina).

Encouraged by this early box office success, Serrano decided to take risks with his second film, which analysed and criticised, with humour and irony, the poignant reality of Spanish cinema during the dark days of the Francoist dictatorship, when filmmakers not only had to bow to censorship, but even satisfy the whims of crass, all-powerful producers. To the disappointment of those behind the film, Days of Cinema didn’t receive the expected level of popular success, despite a cast that included some famous faces from television, like actor Fernando Tejero.

But this summer, with another much more colourful, upbeat and positive musical comedy, Una Hora Más en Canarias [+see also:
trailer
interview: David Serrano
interview: David Serrano, director of …
film profile], Serrano hopes to put the lack of success of his previous film behind him. The keys to his new film are completely different: lots of light, a funny romantic entanglement and a joy for life (and love) are some of the elements in a work that includes sexy Latin American beauties, songs to fall in love by and elegant costumes.

Una Hora Más en Canarias has echoes of Jacques Demy (The Young Girls of Rochefort in particular) and Woody Allen’s foray into the genre (Everyone Says I Love You). Shot in Madrid and the Canary Islands with Catalan actor Quim Gutiérrez (Best Male Newcomer Goya for DarkBlueAlmostBlack [+see also:
film review
trailer
film profile]) in the role of a man lusted after by three unscrupulous girls, who will do anything to win his love, the film invites people to dream, sing, dance and even fly every time one of the characters falls in love.

The plot centres on the struggles of Claudia (Angie Cepeda), a beautiful spirited Colombian woman who runs a wine shop, as she tries to get back her ex-boyfriend and business partner Pablo (Gutiérrez), now engaged to the dependable, well-mannered and seemingly perfect Elena (Miren Ibarguren). Claudia is helped by her sister, the sensible and calm Mónica (Juana Acosta), but she doesn’t suspect that she too will fall for the charms of the young man.

Elegant choreography, colourful cinematography and famous Spanish pop songs underscore the magic tone of this romantic tale that will attempt to refresh and brighten up the torrid Spanish summer.

“We tried to make an American-style film, but with a Spanish budget”

David Serrano, writer of hit films The Other Side of the Bed and its sequel, has directed his third feature, another musical, inspired by Jacques Demy and Woody Allen

David Serrano returns to the genre that made him a screenwriting sensation, this time with pop songs, actors from both sides of the Atlantic and a man desired by three women

Tomás Cimadevilla | • Producer Comedies and beyond

The director speaks about his debut film, one of the surprises of the Official Selection at the thirteenth edition of the Malaga Spanish Film Festival.

A total of 43 co-production projects, including five presented by production companies from Spain and two from Portugal, have been selected by the Ibermedia Programme Committee as part of its... 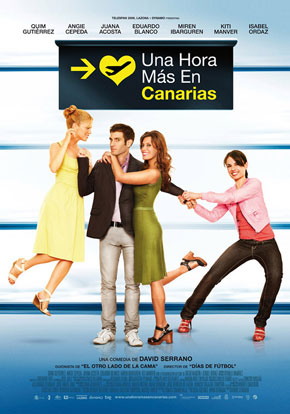