Shakespearean-style comedy in Kaurismaki’s The House of Branching Love

This weekend, viewers at the Brussels Film Festival had the chance to discover the other Kaurismaki brother’s new work: The House of Branching Love [+see also:
trailer
film profile].

A rare comic title in the competition, this outlandish farce unravels in three sections a tangle of misunderstandings, in an unlikely encounter on the edge of a Finnish lake, which is somewhere between The War of the Roses and Shakespearean romance. While his brother Aki is known for his dry, deadpan and other-worldly humour, Mika Kaurismaki isn’t afraid to plunge into extravagant vaudeville-style farce.

Juhani and Tuula are well over 30, and are (too) sensibly married. They decide very sensibly to get divorced, and rather less sensibly to share their beautiful and light-filled house until they find a buyer. The basic rule of successful co-habitation (no lovers or mistresses under the former marital roof) is soon broken, and it’s the start of a psychological war that quickly turns to physical confrontation.

It’s difficult to resist the delightful avalanche of insults and low blows that the two future ex-spouses dish out to each other relentlessly. But soon Kaurismaki surrounds the couple of protagonists with a host of secondary characters who are certainly colourful, but somewhat dilute the strength of the narrative.

We’re delighted to rediscover Aki’s two favourite actors, Kati Outinen as a mother literally acting as a pimp, and Kari Vaananen as a touching but unworthy father. The henchmen are suitably sinister-looking, the young protagonists conventionally good-looking, the sidekicks completely twisted, and after exploding the foundations of life as a couple, all’s well that ends well, if possible in a field of corn at sunrise.

A 100% Finnish production, The House of Branching Love enjoyed immense success in Finland, attracting almost 145,000 viewers, which put it in second position in the 2009 domestic box office rankings. No Belgian release is planned for the time being.

more about: The House of Branching Love

Masks are off in Little White Lies

After attracting attention with Anything You Say (nominated for the Best Debut Film Cesar 2003) and winning honours for Tell No One (Best Director Cesar 2007, over 3m admissions in France and...

Shakespearean-style comedy in Kaurismaki’s The House of Branching Love

This weekend, viewers at the Brussels Film Festival had the chance to discover the other Kaurismaki brother’s new work: The House of Branching Love. A rare comic title in the competition, this...

The latest Brussels Film Festival will run from June 23-30. With the new director comes a change in direction: the festival has the same aim – introducing Brussels audiences to the diversity of...

Moomins and Reindeerspotting premiere on Croisette

Tonight, the world established Finnish classics for children the Moomins featured in Maria Lindberg’s stereoscopic 3D film Moomins and the Comet Case, will have a red carpet world premiere at...

The Finnish film industry is increasingly looking beyond its borders – and even outside the Nordic region-for co-financing.

Distributors at the Berlinale tempted by Nordic films will be pleased by the recent announcement by Hanne Palmquist, head of Nordisk Film & TV Fond, that she has a new grant of to €250,000 for...

Svensk Filmindustri International (SF) has closed a deal at the European Film Market (EFM) on the Norwegian film Upperdog by Sara Johnsen, with Polish distributor ITI Cinema. "We are really happy...

Wide Management pins hopes on All That I Love at Sundance 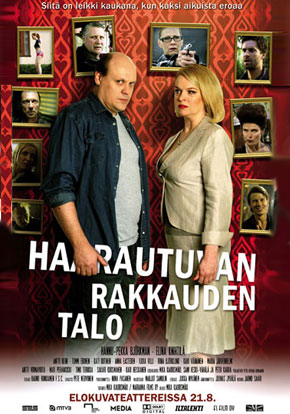