All seems possible for Mission: London

Dimitar Mitovski’s debut feature Mission: London [+see also:
trailer
film profile] surprised everybody when it opened in Bulgaria on April 16 with 46,291 admissions its first weekend, making it the third highest opener ever in its home territory. The comedy went on to sell 142,833 tickets in the first ten days on release, beating Avatar’s 130,770. After 11 weeks in theatres, it now stands at 352,625 admissions and a box office of €1,282,491, by far the highest grossing local film of all time.

Based on the immensely popular novel by Alek Popov, who also scripted the film, Mission: London is a comedy of errors set in the Bulgarian embassy in London. The embassy is in disarray – the consul has set up a “duty free shop” that sells cigarettes and alcohol from diplomatic supplies to London’s Bulgarians – and hardly ever engages in any sort of diplomatic activities.

The country has just joined the EU, and president’s wife (Ernestina Shinova) wants to arrange a celebration and invite Queen Elisabeth herself. To this end, she appoints a new ambassador, Varadin (Julian Vergov), who should set the embassy employees straight and make sure that the Queen attends the party.

Besides local comedy values, which include many figures from Bulgarian public life – including musician Koceto Kalki, right-wing politician Pavel Chernev, turbo-folk singer Alisia and pop and opera singer Orlin Goranov (who plays the president) who, intriguingly, mock themselves in the film – Popov and Mitovski infuse the film with intelligent and witty dialogue and tight direction, overcoming the boundaries of simple parody. Above all, the film plays on Bulgarians’ image of themselves and displays a healthy self-criticism often characteristic of Balkan nations.

With a €1.5m budget, Mission: London is technically by far the most advanced Bulgarian film. Giving it a world-class feel and look, the cast includes Guy Ritchie regular Alan Ford and Ralph Brown (The Boat That Rocked [+see also:
trailer
film profile]), along with internationally renowned Georgi Staykov (Millennium trilogy, The King of Ping Pong [+see also:
trailer
film profile]) who also plays his own alter-ego, a “Bulgarian De Niro”.

The stylish cinematography is the work of Bulgaria’s top DoP, Nenad Boroevich, while the efficient crew is rounded out by Serbia’s most acclaimed young editor, Marko Glusac. The soundtrack features hits by David Bowie, Blur and the Sex Pistols, which go excellently hand in hand with images of London.

There is no doubt that the money was well spent and this film may well be a model for the box office future of Bulgarian film. The country has a long tradition of comedy, which dried up after its popularity in the 1970s and the 80s – no wonder that the audiences, hungry for quality laughs, rushed to the theatres for a fresh dose of much-needed local entertainment.

Approximately 25,000 Bulgarians watched the film over its first weekend in local cinemas

Alliance Media Partners and Roger! Pictures team up for It Came from the Desert

Mixing real-life characters with fictitious ones, the story of the new movie is set in 1872

Producer on the Move 2014 – Macedonia

Cineuropa met up with Macedonia’s Producer on the Move, Ognen Antov, of Dream Factory, to discuss the current state of the film industries in Macedonia and the Balkans, and his upcoming projects

Without the powerful domestic releases of the previous year, Bulgarians focus on Hollywood blockbusters during 2012

The total number of admissions to Bulgarian cinemas increased by 18% in 2011 compared with 2010, the National Film Center has told Cineuropa. Last year, some 4.72 million tickets were sold, while...

The top prize of the 30th Golden Rose film festival, held in Varna, went to Atanas Hristoskov's first feature, No. 1 [pic]. The jury unanimously chose the film for its strong message against...

Romanian and Bulgarian commissions have chosen Morgen and Tilt, respectively, to represent the two countries at the next year's Oscars. Produced by Mandragora Movies with the help of Slot Machine...

Pécs International Film Festival, Hungary’s oldest film event, has had many different formats since its creation. Its current edition has been in full swing since Monday and will run until October... 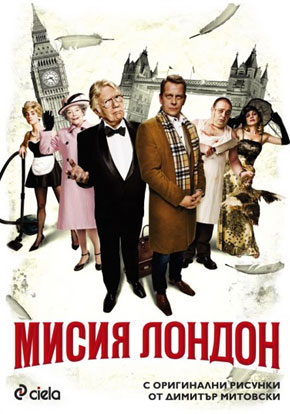