Of Gods and Men

05/07/2010 - A sumptuous French film about a group of monks well integrated in a Muslim world who must confront their faith as mortal danger approaches. Winner of the Grand Prize at Cannes 2010

Based on the murder in 1999 in Algeria of the monks of Tibhirine, the film rather brilliantly overcomes the difficulties related to the austerity of its religious subject matter and absorbs viewers in a real feeling of empathy towards these Christians who are well integrated in the middle of a Muslim world and confronted with their faith while mortal danger draws closer.

Prayers and songs, religious study, manual work: the life of eight monks at the Atlas Monastery passes by in a routine dominated by silence and frugality. But the small community led by Brother Christian (Lambert Wilson) is also much appreciated by villagers who flock to the medical consultation with brother Luc (Michael Lonsdale), get help with administrative documents and come for advice...This understanding beyond religious belief is revealed through the contrast between the monastic discipline and lively outside world, with a pace that is slow but acceptable thanks to a beautiful directorial approach including sumptuous panoramic views of a landscape that stretches as far as the eye can see.

The atmosphere suddenly grows tenser when a group of radical Islamists cut the throats of some Croatian workers 20 kilometres away, before bursting into the monastery one night, armed with weapons. Refusing to give in to them, brother Luc keeps the danger at bay but must now deal with the fear felt by several monks ("I didn’t come here for a collective suicide") who are wondering whether they should leave the region, and even the country. The danger then continues to grow, and is worsened by some offhand military servicemen who want to protect or evacuate the monks and suspect them of being too indulgent with the enemy.

Should they leave or stay? This nagging question gradually takes on sharper dimensions touching on faith. The eight monks each react in their own way, some coming close to a vocation crisis, others assuming their commitment ("In my life as a doctor monk, I’ve dealt with very different people, including Nazis and even the Devil. I don’t fear death, I’m a free man") led by brother Christian who binds the community together ("Our mission is to be a brother to everyone", "Love endures all things") before something happens from which there is no return.

Carried by an excellent cast, Of Gods and Men comes close to perfection, but is marred by some overlong passages and above all by an ending that delivers a questionable version of events (the monks are killed by the Islamists, whereas in reality the possibility of a military blunder has certainly not been ruled out), while the magnificent dinner scene that precedes it, accompanied by Tchaikovsky’s Swan Lake, would have made an ideal ending.

more about: Of Gods and Men

Of Gods and Men

"Beyond religion, the film is about men"

Pathé International to wield an XXL line-up in Berlin 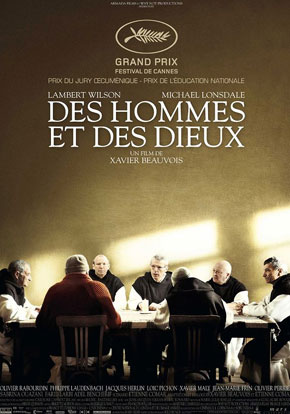