24/08/2010 - A moving, in-depth look at the struggle of an immigrant woman who is arrested after many years of living illegally in Belgium. A powerful film finalist of the LUX Prize of the European Parliament 2010

Tania, a Russian illegal immigrant, has been living in Belgium for eight years with her 13-year-old son Ivan. Quietly integrated, they live in constant fear of being detained for questioning, which is an inevitability. As soon as this happens, the camera clings to Tania’s body, and follows her to a closed detention centre.

Her sole obsession is to protect her son from deportation, and this angle enables Masset-Depasse to avoid the pitfalls of the genre. It is not a question here of offering viewers a sociological study of detention camps, although the film doesn’t hide the realities of that world. Through Tania’s encounters, we discover the centre’s “residents”, the other refugees, as well as the police officers and wardens, who are all plunged into an inhuman situation, at the limits of the describable.

It’s a delicate balance when emotion seems easy: filming Tania’s distress, her terror at the suddenness and violence of the deportation which threatens her and takes away her Malian fellow detainee, children imprisoned in the centre, the agony of the telephone… The situation echoes the numerous reports that have recently cast a tragic shadow over the news, and the inevitable ends up happening, Tania also becomes a news story.

With a formal mastery amply demonstrated in his debut feature, Cages [+see also:
trailer
film profile] (sometimes to the detriment of its characters), Masset-Depasse here hides his directorial presence behind a plot that is heavy but never ponderous, giving a topical subject a narrative and universal side, between incomprehension and revolt.

Illegal is one of the three finalist of 2010 LUX Prize

A moving, in-depth look at the struggle of an immigrant woman who is arrested after many years of living illegally in Belgium. A powerful film finalist of the LUX Prize of the European Parliament 2010

TORONTO 2018: Belgian director Olivier Masset-Depasse returns with his third feature Mothers' Instinct, and we talked to him about it 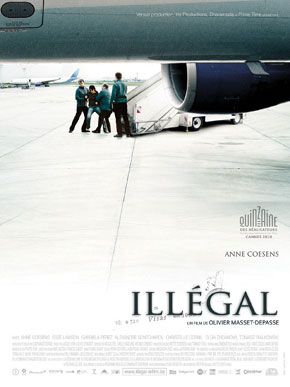