24/08/2010 - A heartrending debut feature, winner of the LUX Prize 2010 of the European Parliament and the Europa Cinemas Label Award in the Berlinale Panorama 2010

From the moment she decides to have an abortion, at the very start of the film and despite her immense maternal instinct, we realise that beautiful Umay is a strong heroine who suffers in order to break away from the role assigned to her by her family’s culture, a break that is made through several departures. The film thus traces the heartbreaking journey made by the young woman (brilliantly played by Sibel Kekilli, who also rebelled against Turkish traditions in Fatih Akin’s Head-On [+see also:
trailer
film profile]), from the moment she leaves Istanbul to protect her son from the beatings of a husband she no longer wishes to submit to and returns to her family, who have settled in Germany (a journey that Akin makes in the opposite direction in The Edge of Heaven [+see also:
film review
trailer
interview: Fatih Akin
interview: Klaus Maeck
film profile]).

Alas, at this family table, voices also tend to get raised, and Umay’s rebelliousness (which is nonetheless discreet and controlled) is seen, particularly by her father and most violent brother, as a shame on all of them. "If only you were a boy", says her father, who finds it hard to obey the categorical imperative of tradition but has no other choice than to resign himself to it, just like the others, including her best allies, her mother, sister and younger brother. The latter’s lack of authoritarian brutality leads the father to accuse him of not acting like a man.

Umay thus finds herself cornered and once more forced to flee from her loved ones, despite everything, in order to avoid the reprisals and violence of the men in her family and spare them dishonour in their community. At the centre for battered women where she finds temporary shelter, this time she finds herself before an empty table, alone and cut off from her family’s love. The viewers, deeply moved by Umay’s calm and pure madonna-like face, on which the camera lingers, and the infinitely gentle gazes she exchanges with her child, naturally come to share her distress.

As the portrait of this Turkish-German family is not Manichean or without tenderness, we hope, like Umay, that when it comes to choosing between the community and her, her family will choose her. Indeed, her determination to protect her son is only equalled by her continued perseverance in trying in vain to mend broken ties. What Umay chooses is the right to choose, to go against docility and blind acceptance of the rules to which her family clings ("things aren’t always as we want them to be", says her long-suffering mother) and to follow her heart.

Here, the director underlines the absurdity of a choice one shouldn’t have to make but, at the same time, points to its irrevocability. We thus realise, after hoping so much for Umay, that the film is less the story of an emancipation than a real tragedy, and the mother alone against the world at the start of the film will end up going away alone, with her child in her arms. There is no "other side" here, the fate of a Turkish wife is the same on both sides of the Black Sea.

When We Leave has also been awarded the 2010 LUX Prize

more about: When We Leave

Interview with Feo Aladag, the director of When We Leave, winner of the LUX Prize 2010.

“The universal necessity we have to be loved for ourselves”

A heartrending debut feature, winner of the LUX Prize 2010 of the European Parliament and the Europa Cinemas Label Award in the Berlinale Panorama 2010

Mediterranea, Mustang and The Lesson to contend for the 2015 LUX Prize

Interview: Doris Pack • Chair of the EU Committee on Culture and Education

The first female armed robber to target German banks is in good company on the silver screen, including an Oscar-winning film and a host of festival favourites

Young European Cinema On the Move: first stop at the RIFF 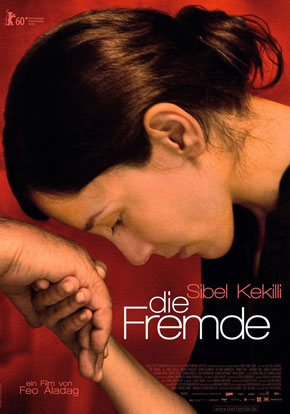