22/09/2010 - This nail-biting Spanish thriller, which has swept up prizes at festivals, including Sundance, puts viewers in the coffin with its protagonist

The sharp opening credits, reminiscent of those Saul Bass designed for Hitchcock, plunge us underground, without further ado. Here, darkness reigns. Bangs, a frightened voice and agitated breathing can be heard. The screen remains black and we feel trapped, buried, submerged in the movie theatre, which is almost as claustrophobic as the coffin where Paul Conroy (Canadian actor Ryan Reynolds), a civilian contractor working in Iraq for the US army, awakes.

He has lit a lighter and we can make out his terrified gaze, as he kicks the coffin walls and the sand from the Iraqi desert creeps in through the cracks in the wooden lid just a few centimetres away from his petrified face. Conroy is buried alive, inside a coffin, in an unspecified place in the desert. And we, the viewers, share this experience. For the next 90 minutes we will be his companions in captivity. So, if you suffer from any type of spatial phobia, you may not be able to stomach this film.

Rodrigo Cortés doesn’t allow the audience a moment of respite. He makes us experience the same feelings as the protagonist: anguish, fear, panic, hope, uneasiness, helplessness, sadness and desperation. He achieves this with a lively directorial style that makes use of unusual cinematic devices.

The tension never wanes throughout the feature, which is bolstered by a script that explores the whole spectrum of emotions without ever leaving the damned box where Conroy (and the viewer, innocent like the character) has been buried.

Buried [+see also:
trailer
interview: Rodrigo Cortés
film profile] is an unusual film. Not just in terms of its storyline and the limit-experience it imposes on viewers, but also in its conception and production. It was shot in Barcelona, over 17 days in August 2009, with the basic lighting seen in the film – a lighter, a torch, a mobile phone and a bar of light – a Spanish team (except for the lead actor and screenwriter) and a budget of under €2m.

This project of modest means has become one of the films of the year: it has triumphed at numerous festivals, will be released in the US on a 2,000-print run and has been sold around the world.

This success is surely down to the passion, effort and ambition of Cortés, who aimed for a North by Northwest in a wooden coffin. And judging by the results, he has pulled this off, for the film shifts from high-tension thriller to other genres like action film and moving drama.

This fascinating experience begins with us not knowing anything about the central character and, 90 minutes later, knowing not only his circumstances but also those of a society in which this man is in the grip of a system in which he counts for little.

Cortés seems to have achieved his goal. The film has received rave reviews in the US and on the Internet, and there is talk of Sigourney Weaver starring in his next project. Quite a triumph for a Spanish production with an energetic script and a wooden box as its main location. Even Hitchcock himself would applaud Buried.

Review: Down a Dark Hall 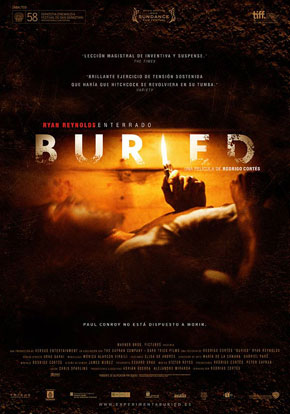 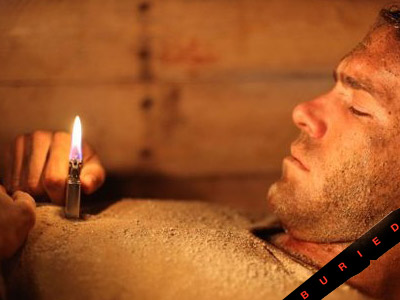