“Why weren’t we the first to come up with the idea?” Like Claudio Bisio, many Italians have asked themselves this question on seeing Dany Boon’s film Welcome to the Sticks [+see also:
trailer
film profile], the 2008 French box office champion. The same question occurred to Medusa Film, who after releasing the original film in Italy (€4m in box office takings), thought about doing a remake, in collaboration with Cattleya.

Besides, who better than the Italians know about the divisions – geographical, cultural and linguistic – between North and South?

These are such familiar issues that, explains producer Riccardo Tozzi, “I keep thinking ours is the original, and the French one a rather contrived remake”. And so we have Benvenuti al Sud [+see also:
trailer
film profile] (“Welcome to the South”). Like its predecessor, the film also centres on a postmaster (Bisio) who goes as far as pretending he’s disabled in order to get transferred to a more “prestigious” office. But he is found out and, as punishment, is sent to the south instead of yearned-for Milan. “Bologna?”, he asks. No, much further south: beyond Naples, in Cilento.

When viewers see the sunny, remote seaside village where the protagonist ends up, they would do anything to be in his position: but for the “polentone” (derogatory term for a Northern Italian), who has left behind his wife (Angela Finocchiaro) and son in the Lombardy mist, it is a real blow. Of course, he changes his mind, surrounded by the humanity of his new fellow employees.

His main friend is Mattia (Alessandro Siani), who suffers from an incurable Oedipus complex that only his love for colleague Maria (Valentina Lodovini) can cure.

Directed by Luca Miniero, Benvenuti al Sud, explains the director, “represented a challenge: seeking originality not so much in the story but in the film’s soul”. Indeed, the plot stays pretty faithful to Welcome to the Sticks and has the “blessing” of Boon, who makes an amusing cameo appearance (the film will be released in French theatres).

Produced by Medusa and Cattleya in co-production with Germany’s Constantin Film, Benvenuti al Sud will be released in Italy on October 1 on over 500 screens. If it is as successful as hoped, there is already talk of a sequel told “the other way around”, Benvenuti al Nord (“Welcome to the North”).

From the Bova-Argentero duo to Perez, movies in theatres this week

Spain has its own Welcome to the Sticks 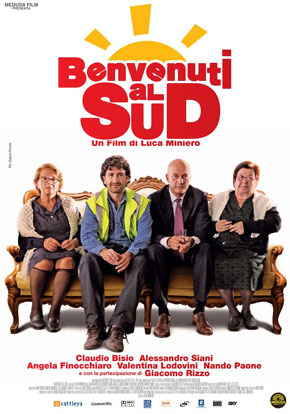